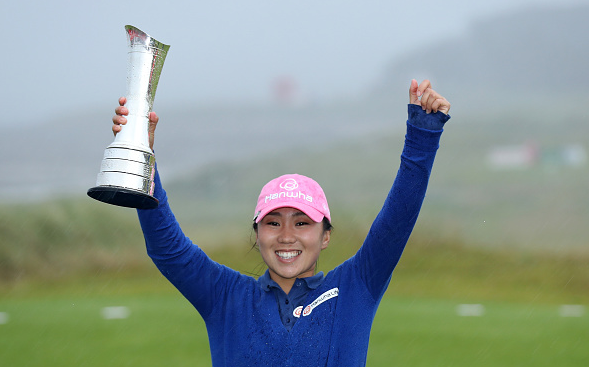 In-Kyung Kim posted a final round 1-under 71 at Kingsbarns and captured her first major title at the Ricoh Women’s British Open. 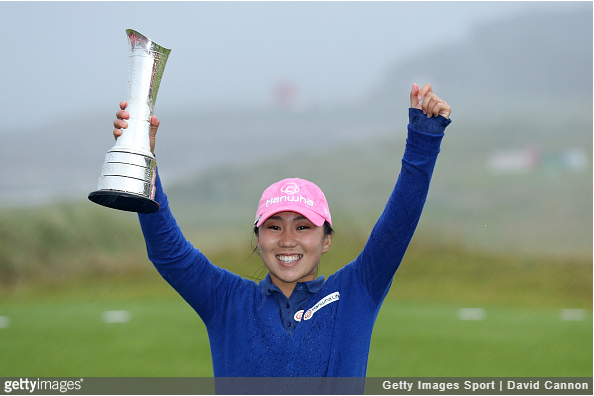 Kim, who entered the final 18 holes with a six-stroke lead, got off to a dream start with a near ace on the par three opening-hole. A tap-in for birdie gave her a seven shot cushion, and from there the 27-year old put it on cruise control, finishing even-par over the final 17 holes, with just one birdie and one bogey against 15 cool pars.

“I feel quite uplifted, I have to say because I really didn’t expect to win this week,” said Kim who has two wins in her last three starts. “And having the lead and then going into the last round, was a great task. I think I managed it quite well.”

England’s Jodi Ewart Shadoff made a late charge with an 8-under 64 to get to 16-under, but even that wasn’t enough to catch the hottest women’s professional golfer, who finished two clear of runner-up Shadoff at 18-under par.

The win is sort of redemption for the quiet, unassuming Kim, who struggled emotionally following a missed one-footer to win the 2012 ANA, and her first major.

The video of the missed-putt went viral, and Kim became something of an Internet meme. Now five years later, she is finally a major champion, and the season’s first three-time winner.

She may no longer be a world-wide Internet sensation, but she’s one of the most sensational golfers in the world.

“I think we judge ourselves a lot, everybody does. But for our own self, I think sometimes you’ve got to have some self-compassion and we can make some mistakes,” said a reflective Kim. “But I hope that mistake will make a more positive impact in life instead of dwelling on it, on the past. If you think about it, I think present moment is more special.”

Michelle Wie shot a final round 66 and moved into a tie for 3rd. The late charge booked Wie a spot on the U.S. Solheim Cup team.

“I stopped drinking actually. I think my friend would no why — I have no control over it (laughter). I just let go myself of myself once a year when I’m in Korea in a safe place. So whisky, I mean, my grandparents used to own a whisky factory. I can drink but I don’t think it would be good for my golf.”