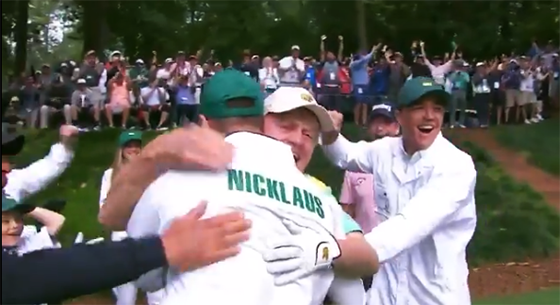 Jack Nicklaus’ grandson, Gary Nicklaus Jr., makes an ace on the final hole of the Par 3 Contest on Wednesday, and the gallery at Augusta National goes absolutely bonkers. The most underrated aspect is that Junior was wearing one of those bulky caddie getups. Impressive!

Here’s another version, with Gary Player providing play by play (in the second half of the clip), before the South African legend joins Jack and Tom Watson in the celebration.

Listen in as @garyplayer narrates Gary Nicklaus Jr.'s hole-in-one on No. 9 of the Par 3 Contest. #themasters pic.twitter.com/9NTARoy3gE

Gary Jr., 16, is the son of 49-year old Gary Nicklaus – Jack and Barbara Nicklaus’ youngest son, who had a brief PGA Tour career. Of Nicklaus’ 22 grandchildren, Gary Jr. is said to be the only one with pro potential.

“He’s got really strong legs, he’s a strong kid,” Jack said during the PNC Father/Son Challenge. “(He) hits it a long way (and) he’s got pretty good touch.”

Afterwards, Jack posted a note to say it was a memory of a lifetime.