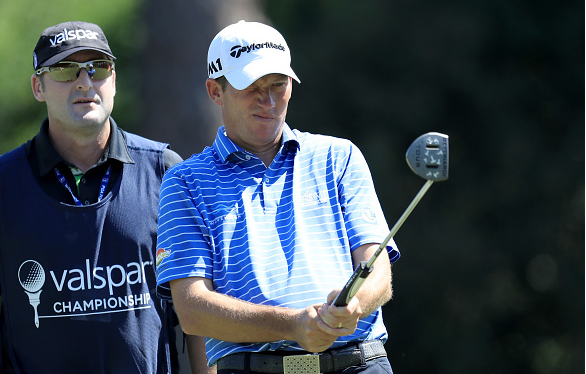 Jim Herman is the first round leader of the Valspar Championship after shooting a bogey-free 62 at Innisbrook’s Copperhead Course in Palm Harbor, Florida.

The 39 year-old Herman is at 9-under par, following an impressive opening round, which included 9 birdies. Playing in a morning group with Billy Horschel and Ben Martin – who both struggled to +4, Herman ripped off 5 birdies over his first 7 holes, and 9 through 14, before cruising to even-par down the stretch.

Despite his sizzling round, Herman finds himself only 2 strokes up on Henrik Stenson and Russell Henley, heading into Friday’s round two. Both Stenson and Henley shot 7-under 64s, and are tied for second place.

When you shoot a 9-under 62 with no bogeys, you’re not going to struggle too much in any aspect. And Herman was consistently solid all around today, especially with his accuracy – which has always been his strong suit.

The Cincinnati alum hit over 80% of his greens and just about 70% of of his fairways. Those kind of numbers are going to produce a lot of birdie chances. And once on the green, Herman took advantage of those opportunities – draining 9 birdies, and leading the field in strokes gained putting (3.018).

Si Woo Kim seemed to be one of the break out stars of the late summer. The South Korean won the Wyndham Championship in late August and then went on an impressive run in the playoffs with a T15 at the Deutsche, a T20 at the BMW and a T10 at East Lake. For the season he finished in 17th place in the FedEx Cup race. Big things were expected for the 2017 season.

And things didn’t get any better for Kim at the Valspar. The 21-year-old struggled to a 10-over 81 and withdrew.

Aaron Baddeley, one of the very best putters in the business, drains a 53-footer on the 14th hole. Boom!