Marc Leishman and Adam Bland will head into the weekend with a share of the lead at the Australian PGA Championship. 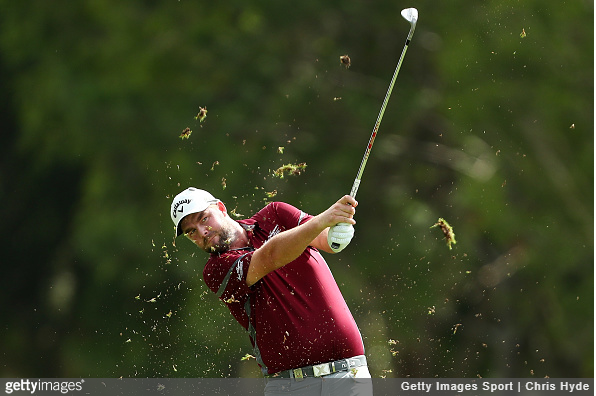 After two rounds of play at RACV Royal Pines Resort the Aussies were at 12 under, two up on compatriot Greg Chalmers, who shot 66 to reach 10 under and make it an all-Aussie top three.

In fact, Australians held 10 of the top 13 places after day two, with American, and defending champion, Harold Varner III the top foreigner on the board.

For the second consecutive day, Leishman’s round was highlighted by an eagle on the the par-5 15th hole. The eagle offset a couple of bogeys en route to a low-round 65.

“There’s obviously a long way to go,” said Leishman. “Playing in front of friends and family, that’s always nice no matter where it is. Here there seems to be more friends and family because it’s a bit closer to home.”

Bland also had something of a day-one redux, posting a second-straight impressive round of 66 with just one bogey against seven birdies.

“It’s always great to get off to a flying start but if you can’t back it up in the second round or at least be thereabouts, you’re kind of just chasing your tail for the rest of the week,” said Bland. “So it was really important to get off to a good start this morning and I seemed to do that, so it was great.”

Chalmers, meanwhile, got off to birdie-bogey start, but played his final 16 holes bogey-free with six birdies to grab sole possession of third place.

Cameron Smith leads another trio of Aussies at 9 under, while defending champion Varner closed with four consecutive birdies to move into the T7 spot at 7 under.

Masters champion Sergio Garcia carded a 71 to sit at 6 under and T10 – six shots off the lead.

“I went and watched the Australian PGA for the first time when it was at Victoria. You go there and of course one day you hope you’re going to play in it and possibly win it. But if it was to happen, it would be pretty huge.”
– Marc Leishman

Watch Joe Biden Get “Confused” After His Golf Ball Goes the...