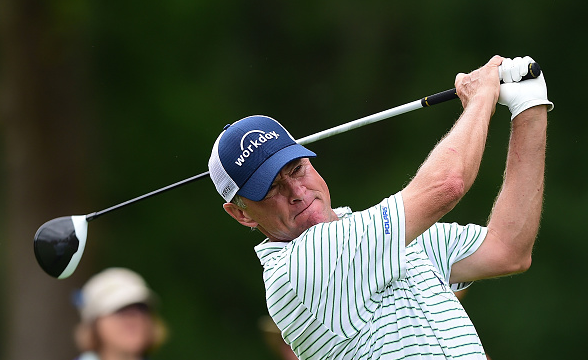 Sebastian Munoz, a 24-year-old Colombian native, fired an opening-round 9-under 61 at the Old White TPC course, and leads the Greenbrier Classic after 18 holes.

Just two back of Munoz is Davis Love III, who posted his best round of the season, a 7-under 63.

“Everything went right today. I didn’t make every putt, but I hit a lot of really, really solid putts and hit a lot of fairways and greens,” said Love III.

The 53-year-old Love, who recently led the U.S. Ryder Cup team to victory at Hazeltine, last won on the PGA Tour in 2015 at the Wyndham Championship.

“That’s about as good as it gets. I hit it stiff at the 1st hole, made a nice putt at the 2nd hole, and actually had a look at it at the 3rd hole. Then 4 and 5 I just was rolling it really well, hitting it really well. You know on a day like today you’re going to have to get your good round in. This is as good a scoring conditions as we’re going to get probably for the whole week. I’m glad I took advantage of it.”
–Davis Love III