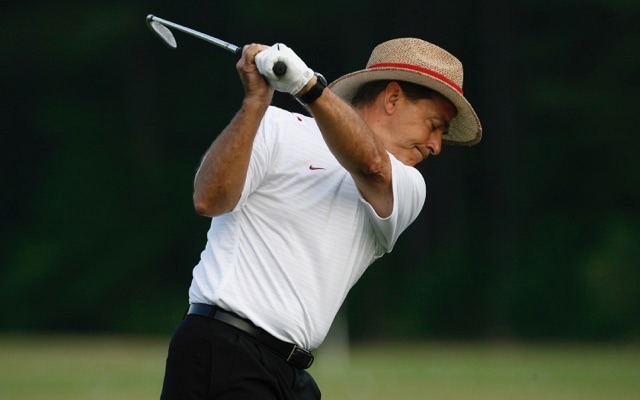 As pretty much everyone knows by now, Justin Thomas is a big fan of Alabama football. So after the Tide won the National Championship earlier this week, the reigning PGA Champion dialed the phone number of coach Nick Saban to leave a congratulatory message.

The legendary coach had called Thomas after he won the PGA Championship this past summer, so the 24-year old star just wanted to return the courtesy but was surprised when Saban actually answered his phone.

“I called him expecting to leave him a voicemail and I think he caught me by surprise more than I ever have when he actually answered. It was good to just briefly talk to him; it’s always fun to tell people congrats in person versus over a text or anything like that,” said an excited Thomas.

Thomas also won a bet with Georgia’s Kevin Kisner, who will wear a Alabama shirt on the 17th fairway today in the first round of the Sony Open, where the two are paired together.

I pay my bets and I will wear this jersey on 17 @SonyOpenHawaii today. I will also get @JustinThomas34 to sign it and I will raffle it off to benefit @KizFoundation as well as a @FootballUGA jersey signed by both. We will send out the link tomorrow! pic.twitter.com/5oEYwSNHHs