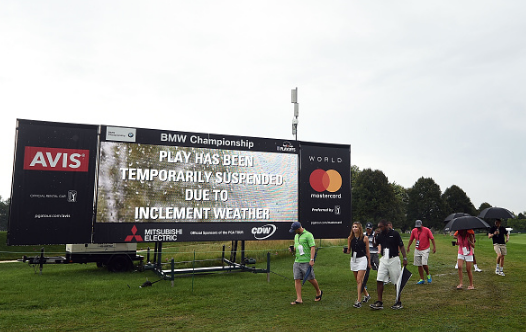 The FedEx Playoffs have reached round 3, but the weather is causing the same problems it did in round 2. Heavy lightning in the Indianapolis area delayed play for over three hours, and after play resumed, less than half the field was able to finish their round.

Roberto Castro, who has had a very up-and-down kind of season, had the best result: a seven-under par 65. Castro leads by one over journeyman Brian Harman, and by two over Jason Dufner, Dustin Johnson, and Chris Kirk. Among those players, Kirk is the only one not yet finished with his round. That -5 is through an impressive nine holes.

(* indicates round not yet finished)

Short explanation: Robert Castro had eight birdies, which lead the field. He nearly finished at -8, but bogeyed the par-4 18th hole. Aside from driving distance, Castro finished highly in nearly every major statistic, and even his driving distance was an impressive 310.1 yards, good for 34th in the field.

Castro made it to the BMW on the strength of a breakout season with 20 made cuts in 25 events, and three top-10s, including a runner-up finish at the Wells Fargo Championship, where he was outdueled by James Hahn in a playoff.

With only 69 players (Henrik Stenson withdrew last week with a knee injury) in the top-heavy field, there are not much of the way of surprises. Fabian Gomez, whose best event this year was a win at the early-season Sony Open, had four missed cuts in his past eight events, making his -4 a mild surprise, but Gomez did finish T5 at last week’s Deutsche Bank Classic.

Kevin Na missed last week after his first child was born, but he shook off the rust quickly, with a birdie on his very first hole. He added an eagle and another birdie on the front nine, and finished his round with a three-under 69. Jim Herman has mostly struggled, with no top-20s since his surprise win at the Shell Houston Open earlier this year, but he looked good in round 1 and is at 3-under with two holes left to go.

Defending champion Jason Day was, understandably, one of the favorites going into this tournament. During the first round, however, he did not look like the world’s #1 ranked golfer. He had an uncharacteristic six bogeys in a +1 round. Only two players in the field had more bogeys.

PGA Champion Jimmy Walker found the going tough in his first few events after his breakthrough major victory, but after a third-place finish at the Deutsche Bank, it looked like his game was back in elite form. However, his tee-to-green game was MIA and he finished with a two-over 74. Rickie Fowler, needing a great week to impress Ryder Cup captain Davis Love III, did not have the round he needed. Another round like that, and he will be risking getting passed over for a Captain’s pick.

Rory McIlroy exploded up the final round leaderboard at the Deutsche Bank, and appears to be still be hot. He is at 3-under par through just 10 holes. He will be one of the most followed players when play resumes at 8:00am tomorrow.

“Definitely, the first 12-13 holes before the delay were really firm. Downwind, it was tough to judge the bounce. It’s definitely more gettable out there right now.”
-Current first round leader Roberto Castro on the difference between the course conditions before and after the delay.

Hurricane Warning Forces a Monday Finish at The Northern Trust