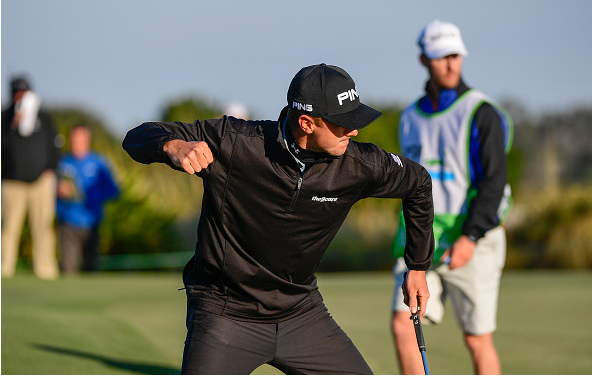 The RSM Classic wrapped up this morning with Mackenzie Hughes sinking a par putt from off the green on the third playoff hole. The PGA Tour Rookie became the wire-to-wire champion despite some struggles on Saturday and Sunday.

Rounding out the top five were Billy Horschel, Blayne Barber, Henrik Norlander and Camilo Villegas, who all finished T2.

On a sponsor invite, Henrik Norlander, made some noise on Sunday by carding a 5-under 65 to get himself in the playoff. Norlander missed the green on the first hole but proceeded to chip in for birdie to get himself going. Norlander came to the last needing to make birdie and grab the clubhouse lead and he delivered by sticking his approach shot inside of 5 feet.

Chesson Hadley found himself alone in 5th heading into Sunday. Unfortunately, Hadley did not make the move that he needed to in his final round. Hadley fired 7-over on his first nine and then came home in even par. Hadley fell 40 spots down the leaderboard into a share of 45th.

Canadian Mackenzie Hughes, needed to make a knee-knocking 5-footer to get into the playoff. Hughes found the edge of the cup and lipped in to finish at 17-under.

He made par on all three playoff holes but none was bigger than his $1.08 million dollar par on the third playoff hole. Hughes was first to play after leaving his chip on the fringe but he buried it dead center and putt the pressure on his playing partners. Villegas, Norlander and Barber all missed their chances and Hughes became the wire-to-wire winner.

The Fall Tour season is over, but there are several unofficial events on tap over the next month, including the ISPS HANDA World Cup of Golf (November 24-27) in Melbourne, Australia. Tiger Woods is due to make his return at the Hero World Challenge December 1-4 in the Bahamas. And the Franklin Templeton Shootout, which is a two-man event, will be played December 8-10 in Naples, Florida.

The PGA Tour will return at the Tournament of Champions January 5-8 in Kapalua, Hawaii.