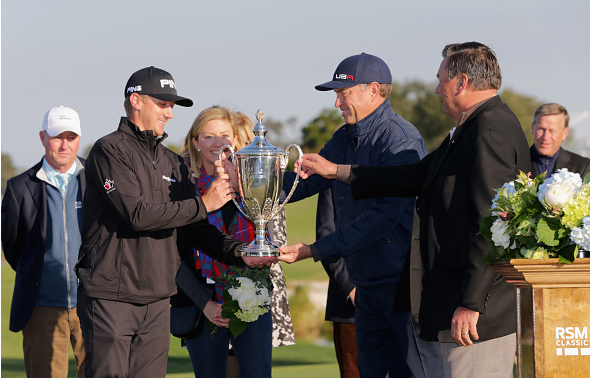 Mackenzie Hughes, the pride of Canada golf, held at least a share of the lead after play finished on Thursday, Friday, Saturday, and Sunday. After so much time ruminating on how he would maintain that lead, and what the win would mean for the PGA Tour rookie in just his ninth career event, Hughes was not going to lose that all on a Monday.

A one-under 69 in the final round, was enough to get Hughes into a thrilling five-man Monday morning playoff, and a clutch par putt from off the green on the third playoff hole, the 75th hole of the tournament, gave him a life-changing victory in The RSM Classic, the last event of the fall series, and last PGA Tour event in 2016.

To win, Hughes had to fend off Camilo Villegas, Henrik Norlander, Blayne Barber, and Billy Horschel in the playoff, four players who had different reasons for needing the win.

HOW HUGHES DID IT

Going into the RSM, the best finish of Hughes’ PGA career was a T13 at the season-opening Safeway Open in October. He was undoubtably talented, which many were able to see when he was paired in the final round with fan-favorite Phil Mickelson at the Safeway, but it was still a bit of a surprise to see the Web.com Grad go wire-to-wire in a tournament against a strong field.

With a first round 61, Hughes set the pace early in the tournament, and held onto small leads after each round with a 67-68-69 finish over the next three days. 54-hold leads have shown to be difficult to hold onto in today’s PGA (only Hughes and Hideki Matsuyama have been able to do that in the new season), but Hughes stayed tough.

After a bogey on 11, a hole he had tripled the previous day, the leaderboard tightened, but Hughes went one-under over the last seven holes to get into the five-man playoff.

This tournament had been at least somewhat defined by extreme logjams on the leaderboard. On Thursday, 22 golfers finished in the top 10, with an insane 15 of those being T8. Friday saw ten golfers finish tied for seventh place, and Saturday ended with a three players tied for second (Villegas, Horschel, and Cheng Tsung Pan).

It was appropriate that there were five golfers tied for the lead through 72 holes of the tournament.

The first hole of the playoffs looked as even as the back nine had: four of the five players parred, with Billy Horschel missing a very short gimme putt when his concentration surprisingly broke.

The second playoff hole was more of the same: the four remaining players all had par. At that point, darkness was upon Sea Island and the round was called. The four would settle the tie on Monday morning.

Waking up to a 43-degree morning, downright chilly for southern Georgia, the four players remaining the playoff got to see their product from a long night of thinking, and probably obsessing. Nerves were palpable as all four missed the green on the par-3 17th, and it again looked like another hole destined for a tie.

Hughes’ chip shot was disappointing; he just barely missed hitting a spot that would have funneled the ball to the hole, and ended up barely off the green. Hughes, figuring he needed to hole it, especially with Villegas having a very makable par putt, then drained the clutch, winning putt.

Norlander, Barber, and Villegas all got on the green in two, but one-by-one missed their par putts. Barber was out first, then Norlander, and then when Villegas’ short par putt slid left, Hughes was the Tour’s newest first-time winner.

WHAT IT MEANS FOR HUGHES

It is obviously huge for Hughes; this win is life-changing. He had just started his rookie season on the PGA Tour last month, and he already does not have to worry about having his PGA Tour card for at least another two years.

He will be at The Masters, several other elite field events, and he will have all the confidence that comes from seeing his promise turn into tangible results. He will have respect from the fans and fear from his competitors, who took notice of how unflappable he was for 75 holes.

WHY OTHERS NEEDED THE WIN

Billy Horschel: Horschel needed the win the least among the five playoff participants, but it still would have been a huge victory. He broke out during the 2014 FedEx Cup playoffs, where a runner-up, win, win finish allowed him to win the cup, and its $10 million prize despite being in the 82nd position going into the second event.

Since then, however, he is winless, and while he has been consistently good, it feels like he has better play in him. This win could have waken the sleeping monster.

Blayne Barber: This would have been Barber’s first career victory as well. He is coming off back to back seasons of $768,000 in earnings, with a career best result of T3 at the 2016 Honda Classic. Barber has played in just one major, the 2015 U.S. Open, where he missed the cut by a mile after being +11 through two rounds. This win would have opened the doors to more.

Henrik Norlander: The 29-year-old from Sweden was a sponsor exemption, as he just barely missed getting his PGA Tour card through the Web.com Tour Finals (he missed by less than $1000). The exemptions would have been huge for him.

Camilo Villegas: The 34-year-old Colombian was near the top of the golf world after two wins in 2008, which he followed up with one more in 2010 and one in 2014. However, the past two seasons have been brutal for Villegas, with no top 10s, and now only has conditional status on tour.

“If I don’t make that putt, I’m probably done. I tried to flip that around, and say everyone’s got work left for par, but if I can put mine in first, it makes everyone’s jobs harder. So I just tried to make it, do the best I could to make a par, and put up something for them to look at. As soon as I hit it, I knew it was on a good line, and I gave it some pace because I knew if I didn’t make it, I would probably be out, and a foot from the hole, I knew it was right in the heart, and it was such a good feeling to see it to go in.”
– Mackenzie Hughes, 2016 RSM Classic Winner