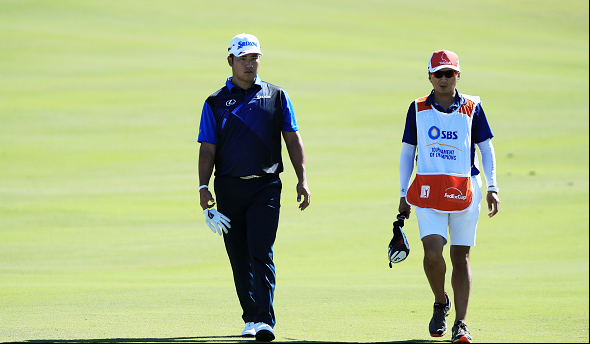 Japanese phenom Hideki Matsuyama had a fairly nice 2016 season, winning one tournament – the Waste Management Phoenix Open – where he ousted Rickie Fowler in a thrilling playoff. He also posted eight top-10s in 23 events, including a T3 at the Wyndham Championship, a T4 at the PGA Championship, and a solo-fifth at the Tour Championship.

While it was undeniably a good season, it was not quite the breakthrough that many were predicting for the ultra-talented 24-year-old.

Since the finish of the 2015-16 season, however, no golfer on the planet has been hotter than the young Matsuyama. Internationally, he has won four of his past five events, with the only non-victory being a solo-second to Justin Thomas at the CIMB Classic in Malaysia.

The last time we saw Matsuyama he was cruising to victory at the Hero World Challenge in the Bahamas, winning by two over Henrik Stenson after being ahead by a ridiculous seven-strokes through three rounds. It was not likely the final round he envisioned (he shot a one-over 73), but it was enough to hold onto his massive lead.

After the way he finished 2016, expectations are now sky-high for Matsuyama, who has risen all the way to #6 in the world, making him the highest-ranked golfer without a major victory (yet). One of the things fans are going to be most interested to see in Hawaii is if Matsuyama can continue his hot streak and blow away the competition again, or if after some time off, he falls back to earth.

Regardless, it is the second appearance at Kapalua for Matsuyama, who finished T3 in 2015, after co-leading through three rounds before finishing one-stroke back of Patrick Reed (who won in a playoff) and Jimmy Walker.