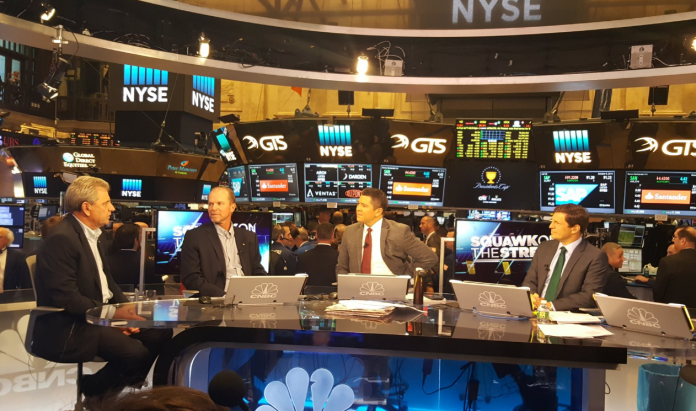 The President’s Cup announced that it has chosen its assistant captains for the 2017 matches, as part of a media blitz to promote the biennial matches between U.S. tour players and pros from non-European countries excluded from the Ryder Cup.

The captains made the media rounds to hype the event, including an appearance on CNBC as well as hitting some putts on the floor of the New York Stock Exchange.

Captains Price & Stricker live on @CNBC from the @NYSE floor. Who's pulling for #TeamUSA & who's cheering for #TeamIntl? pic.twitter.com/ea9TLVSojS

Surprisingly, this isn't the first time there's been putting on the @NYSE floor. The only other to do this? Mr. Arnold Palmer himself pic.twitter.com/oaJn6KsKgH

Thanks to @JimmyRobertsNBC for spending some time with our Captains this morning talking about bringing the Presidents Cup to NYC! pic.twitter.com/o8guB7QDOn

The 2017 Presidents Cup matches will be played at Liberty National Golf Club, in Jersey City, NJ, September 26-October 1. According to the PGA Tour’s release, “The course is located along the Hudson River, with striking views of the Statue of Liberty, Ellis Island and the Manhattan skyline.”

Dustin Johnson tweeted that he’s super excited to tee it up in New Jersey this fall.

The satirical account of Tweeter Alliss notes that President’s Cup officials are confident in their ability to quell the rowdiness we saw at Hazeltine.

Officials confident ugly fan scenes witnessed at the Ryder Cup will not be repeated at the Presidents Cup, as nobody ever attends. Splendid.