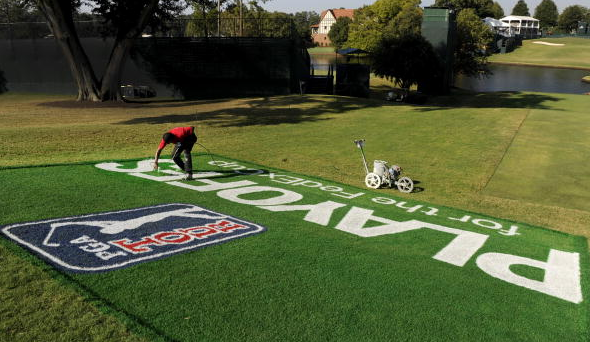 PGA Tour golfers are known for being extremely well compensated for their best efforts, but nobody is too rich to sneeze at a $10 million grand prize. That, along with immeasurable prestige and a highly-coveted trophy, is what awaits the man with the most points after this week’s TOUR Championship, the finale of the 2018 FedExCup Playoffs.

Current FedExCup leader Bryson DeChambeau enters the TOUR Championship with the most FedExCup points, but as part of the resetting and redistribution of points, heading into the finale, the 5,789 points he accumulated during the season and playoff gets reduced to just 2,000, adding many more players into the championship mix, who otherwise would not be.

In fact, the points are set up so that the entire top 5 of the standings control their own destiny. Those five players (in order) are DeChambeau, Justin Rose, Tony Finau, Dustin Johnson, and Justin Thomas.

A TOUR Championship victory from anyone in that group means an automatic FedExCup Championship, the richest prize in professional sports.

That does not mean, however, that only five men are in championship contention; all 30 players in the field, from No. 1 to No. 30, have a path to PGA Tour gold, it’s just that those outside the top five need some help from the field, and the further out, the more help required.

Eleven furious months of scratching and clawing has come to this: four final rounds of competition in its highest form: a field concentrated with the elite of the elite on the PGA Tour.

The FedExCup Playoffs have only existed since 2007, but the roots of the TOUR Championship go back 20 years beyond that.

The first TOUR Championship was held in 1987 San Antonio, Texas, and was won by the legendary Tom Watson by two strokes over 59 Club Member Chip Beck. Other winners of the most exclusive PGA Tour event include Curtis Strange, Paul Azinger, Tom Lehman, Tiger Woods, Vijay Singh, and Phil Mickelson. Only Woods and Mickelson have multiple victories, with two wins apiece.

The TOUR Championship will once be contested at East Lake Golf Club, which has been the regular event host since 2004. Located in Atlanta, Georgia, East Lake was established in 1904, and its prominent claim to fame is being the course that Bobby Jones grew up on. The 1930 Grand Slam winner is believed to have played both his first and last rounds on this historic track.

Justin Thomas shot a final-round 66 at East Lake to reach 11-under for the tournament, and more importantly, leapfrog close friend Jordan Spieth for the No. 1 position on the final FedExCup standings to secure the season-long FedExCup, and $10 million annuity.

With five wins on the season, including a major, and the FedExCup, Thomas was the easy choice for PGA Tour Player of the Year. However, one thing Thomas didn’t win was the Tour Championship. That was captured by the one man to shoot lower than Thomas over the four rounds of the FedExCup finale: Xander Schauffele, a then rookie who put an exclamation point at the end of one of the most out-of-nowhere stories in recent Tour history.

With a three-foot birdie putt on the 18th hole that very nearly rolled out of the cup, the 23-year-old Schauffele shot a final-round 2-under 68 to claim a one-stroke victory over Thomas.

STORYLINE 1: WIN AND YOU WIN

A result of trial and error, the FedExCup Playoffs were tinkered with considerably in its early going. The Tour felt a big change was especially necessitated after the 2008 playoffs, where Vijay Singh had so many points that he clinched the FedExCup title well before the TOUR Championship, sucking all the drama and intrigue from the final playoff event.

Since then, points are reset before the TOUR Championship. In its current system, first place is reset with 2000 points, second with 1800, and decreasing down to No. 30.

This is done to give more players a reasonable chance to win the FedExCup in the final event of the playoffs. In fact, anyone in the top five going into East Lake automatically wins the FedExCup with a victory.

Players aggressively fought for those positions, and after three playoff events, the five leaders are as follows:

DeChambeau went 2-for-3 over the first three weeks of the FedExCup Playoffs? He was dominant at Ridgewood and Boston, and finished T19 at the BMW Championship with rounds of 67, 70, 64, and 67.

The leader in the FedExCup Standings, DeChambeau will be very self-motivated and extremely unlikely to dial back the intensity in Atlanta. A third win in the playoffs, and fourth on the season, along with the FedExCup, would clearly put him in the conversation for the Player of the Year alongside Brooks Koepka, a winner of two majors.

Bottomline, DeChambeau always plays like he has something to prove, making him a great bet again.

In the past 12 months, the new world No. 1 has been hands-down the most consistent golfer on the planet, earning four victories, and 12 additional top 10s in just 23 starts worldwide, including three second-place finishes, all of which have come in his five most recent starts (2nd BMW Championship, T2 Open Championship, 2nd Dell Tech Championship).

Those willing to take the gamble on Rose won’t be getting any kind of discount as the bookies are clearly well aware of his recent form, and have offered the Englishman as the favorite at 9-1.

A game with stunningly few weaknesses has led to eleven top 10s on the season, with seven of those coming in the elite-field events (Majors, WGCs, or Playoffs).

As Jim Furyk’s final pick for the 2018 U.S. Ryder Cup team, Finau should still be extra hungry this week in Atlanta to earn his first regular PGA Tour victory before heading to Paris.

The new world No. 2 is reportedly dealing with some family and personal issues, which may explain his recent form. Still, if the 33-year old South Carolina native can avoid that one poor round, which he’s failed to do lately, he should be in the hunt at East Lake, where he’s finished in the top 5 three out of the last four seasons.

Finally, while Koepka is the betting favorite to win the PGA Tour POY award, a fourth win by either DJ (or JT or DeChambeau) – along with the FedExCup title, and it would become a real debate (two majors versus four titles and FedExCup). So add in that extra motivation as well when placing your bet on the favorite DJ (9-1).

The defending champion of the FedExCup, Thomas enters Atlanta off three (relatively) mediocre starts in the playoffs (T12, T24, T8), but before that he’d finished with three straight top 8 finishes, including a win at the WGC-Bridgestone.

Thomas finished solo-second at East Lake last year, and the 25-year old star should be dialed in again, as a win would give him a record second-straight Cup and a second $10 mil annuity.

The Kentucky native’s ten top 10 finishes include three wins, and a fourth victory would place him in the debate again for POY award. This will be Thomas’ third appearance at East Lake, finishing T6 (2016) and 2nd (2017).

STORYLINE 2: PLAYER OF THE YEAR BATTLE

At the moment, the race to be named PGA Tour Player of the Year is down to one player: Brooks Koepka.

With two major victories on the season, Koepka is the obvious choice against a trio of three-time tournament winners Justin Thomas, Dustin Johnson, and Bryson DeChambeau, as all three were shutout from a major title this year. Clearly, two majors trumps three PGA Tour titles.

However, a fourth win by either of the aforementioned three, along with the FedExCup title, and it would make the debate more intense, although most predict Koepka as a lock, either way.