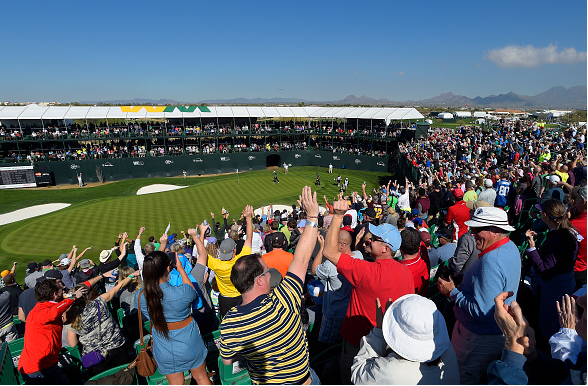 The Super Bowl may very well be the best and most exciting annual event in American sports. That being said, it does not have a reputation for especially rowdy crowds. With spectators spread across different fan bases, and the tickets being so expensive that the crowd ends up being largely a mix of corporate execs and celebrities, it is certainly not the same kind of loud, overwhelming, high-energy atmosphere you see during, say… a professional golf event in Scottsdale, Arizona.

Yep, you heard that right. The most raucous and intense crowds will not be in Houston this weekend; they will be in Scottsdale for the Waste Management Phoenix Open – better known as “The Greatest Show on Grass.”

Possibly the most popular event on the PGA Tour that isn’t a major or The Players (although the attendance is higher in Phoenix than in any other golf event worldwide), the tournament had an unreal 618,365 fans in attendance for the week, including over 200,000 on Sunday.

The week is a huge party, and fans are encouraged to let loose. Those fortunate enough to attend will get to boisterously cheer on some big-name players, including Justin Thomas, Jordan Spieth, Rickie Fowler, and the man who will likely get the most vociferous ovations, three-time Phoenix champ Phil Mickelson.

Nearly as much as any event on Tour, the WM Phoenix Open is an experience.

The tournament bounced around a few courses in the Phoenix area over the next few decades until 1987 when the Stadium Course at TPC Scottsdale became its permanent location. The Phoenix Open has had a lot of great champions in its history, including Byron Nelson, Ben Hogan, Jimmy Demaret, Johnny Miller, Arnold Palmer, Vijay Singh, and Phil Mickelson. One of Miller’s two victories was by an insane 14 strokes in 1975. Mickelson, Palmer, Gene Littler, and Mark Calcavecchia share the tournament wins records, with three a piece.

In a tournament best known for the enormous crowds it draws, the par-3 16th, “The Coliseum”, is its most famous. Surrounded by a large grandstand and 274 skyboxes, players on the hole are subject to the loudest cheering they will hear all season. Since 2000, there have been just three aces on the iconic hole: Mike Sposa in 2002, Jarrod Lyle in 2011, and Francesco Molinari in 2015. Tiger Woods also did it in 1997, his rookie year on Tour.

The defending champion of the Waste Management Phoenix Open is Hideki Matsuyama, who finished at 14-under and won in a playoff against Rickie Fowler.

The then 23-year-old Matsuyama won on the 4th playoff hole when Fowler hit his drive into the water and was forced to settle for bogey. The win at TPC Scottsdale was the second of Matsuyama’s Tour career.

1. The Recent Dominance of Justin Thomas

All the Justin Thomas talk finally died down over the past couple of weeks, but only because he did not play. Thomas, perhaps the only athlete on the planet currently hotter than Matt Ryan, will be coming into the Waste Management Phoenix Open well-rested and ready to continue his unbelievable season.

The 23-year-old from Kentucky is now the world’s #8 ranked golfer, with three victories in just five starts in the 2016-17 season. Thomas won his last two starts, at the SBS Tournament of Champions and the Sony Open (where he fired an opening round 59), by a combined 11 strokes.

The three victories matched Dustin Johnson and Jason Day for the most in 2015-16… and it’s still only January. Thomas faced above average fields in all three of those victories, and the field in this one may be even stronger.

It is not yet a major, but it should still provide another good test of where Thomas stands among the best on Tour. In two previous appearances at TPC Scottsdale, Thomas has a missed-cut (2016) and a T17 (2015) – although he’s never entered with this kind of hype and confidence.

Before Justin Thomas became the hottest player in the world, that title belonged to Hideki Matsuyama. Over a stretch of five tournaments (mostly international) this past fall, Matsuyama won four of them, with his only non-win being a T2 to Justin Thomas at the CIMB Classic.

At the start of the 2017 calendar year, Matsuyama’s hot play continued with another runner-up to Thomas at the Tournament of Champions. The Japanese star was the only one in the 32-man field who was able to put any kind of pressure on Thomas after he went into the final round with a 7-stroke lead.

When Hideki Matsuyama took the Waste Management Phoenix crown last year in a thrilling 4-hole playoff, he looked ready to really break out and become the star he had played like in stretches. The rest of his 2016 season was mostly a quiet success. He did not win any more tournaments, but did have a number of high finishes, including a T4 at the PGA Championship, a T7 at The Masters, and a T7 at The Players. His putting gave him trouble sometimes, but he ranked 6th on Tour in strokes gained: tee-to-green.

Matsuyama has cooled off a bit in his last couple of starts (T27 at the Sony Open and T33 at the Farmers Insurance Open), but the defending champion enters Arizona with great confidence, and as the #5 golfer in the world.

In addition to his Phoenix Open victory last year, Matsuyama was T2 the year before and T4 in 2014. This is a course where he is obviously very comfortable, and it will be a surprise if he isn’t in the mix again this year.

3. Pumping Up The Crowd

The crowd at TPC Scottsdale would go nuts if the field for this event were replaced with the field for this week’s MacKenzie Tour event. But there are players in the field that will fare better than others at pumping up the fans and getting them to be especially enthusiastic.

The two most likely players in the field for that will be Phil Mickelson and Andrew ‘Beef’ Johnston. Expect large, boisterous crowds around those two at all times.

It is getting difficult to keep up with all the venues where Mickelson is beloved, but Phoenix may love him the most. He played his first Phoenix Open in 1989 as an 18-year-old, missing the cut at +5, but finishing tied with some impressive names (Payne Stewart, Bobby Clampett, Steve Pate) – and he’s played in every edition since 1991.

Mickelson is a three-time winner in Phoenix, and played his college golf at nearby Arizona State University in Tempe. Other ASU alums in the field this week inlcude the young Jon Rahm, Pat Perez, and Matt Jones. The past two weeks, Mickelson has finished T21 and T14 – both positive results coming off two offseason hernia surgeries.

Andrew ‘Beef’ Johnston made his first appearance on American soil as a PGA Tour member (he played a few Web.com finals events in the U.S. when trying to acquire his 2017 card) last week at Torrey Pines, missing the cut by three strokes. It was disappointing to not see the ridiculously-personable Johnston on the weekend, but seeing that Torrey Pines also took down the likes of Jason Day, Dustin Johnson, Brooks Koepka, Tiger Woods, and Jimmy Walker before the weekend, we’re inclined to give him a pass.

Regardless of how long ‘Beef’ is able to play in Phoenix, he’s sure to be a massive fan favorite – just like he’s been everywhere else. Nobody in professional golf makes a bigger effort to connect with fans than ‘Beef’ – making him possibly the most entertaining watch in the field this week. The vision of ‘Beef’ nailing an ace on 16, and getting a beer-shower from the crowd would be one of the most epic photo-ops in recent Tour history.

Like Justin Thomas, Spieth took the last two weeks off after competing in the year-opening Hawaii swing – where he finished third in both tournaments. While the final results look good, Spieth was not in contention at either tournament, but vaulted near the lead with impressive final rounds (65, 63).

The immensely popular Fowler (in addition to Spieth) could have easily been added to the above section about players who will really get the crowd pumped up. He had the fans on his side last year when he lost in a four-hole playoff.

Fowler missed the cut at Torrey Pines last week, his only tournament of 2017, but he ended 2016 strong – with finishes of T6, T3, and T2 in his final three events.

The 2015 winner of this tournament, Koepka played relatively well at the end of 2016 (solo-2nd at the Shriners Open), but missed the cut at last week’s Farmers Insurance Open. In 2016, Koepka was a little up-and-down, with the ‘up’ being seven top 10 finishes, including two runner-ups.

Koepka got off to a strong start in his Phoenix Open defense last year with an opening-round 67. However, the former Florida State star struggled in the middle rounds, shooting +4, and finished at T41.

Now a PGA Tour winner after dominating the Sunday field at Torrey Pines, it will be interesting to see how the fiery Rahm responds. An Arizona State product, Rahm should feel comfortable at this course, and in this environment.

He finished T5 in 2015, his only appearance at TPC Scottsdale. Nobody should be surprised if the former world #1 amateur is in the mix again this Sunday.

J.B. Holmes is a two-timer winner of this event, taking the 2006 title by seven strokes and outdueling Phil Mickelson in a playoff two years later in 2008. One more victory would tie him for the most in tournament history.

The long-hitting Holmes has been quiet since the Ryder Cup, playing just three events with a best finish of T33 at last week at Torrey Pines. He rebounded from a +2 first round in last year’s tournament to finish T6. With his history of success at TPC Scottsdale, Holmes should not be forgotten this week.