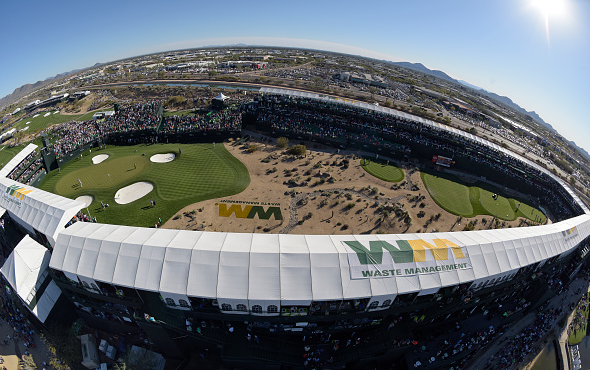 The Waste Management Phoenix Open kicks off on Thursday at TPC Scottsdale’s Stadium Course. The field is loaded with some of the best young stars in the game, as well as big-name veterans with major championships to their resume.

To add to the build up for what is one of the PGA Tour’s most exciting and unique events, here are 10 interesting numbers about the WM Phoenix Open.

The average median temperature, year-round, in the Scottsdale/Phoenix area is 70 degrees, with ranges from 55.7 to 85.8.

There will be 132 players in the field this week at TPC Scottsdale.

It took 193 tractor trailers, loaded with material, to construct the venues for the 2017 tournament.

There will be 274 skyboxes situated around the iconic 16th hole.

The average number of days with sunshine in the Greater Scottsdale area. That’s a 92% sunshine rate.

The number of golf fans that can surround the 16th hole at the Stadium Course.

The number of fans who attended the third round of the 2016 WM Phoenix Open event – a PGA Tour record.

The total square feet of hospitality tents at the event.

The number of fans who attended the 2017 WM Phoenix Open – another PGA Tour record.

This post originally appeared in February 2017. It was updated to reflect the 2018 tournament.

The 2022 PLAYERS Championship Field: By the Numbers (Plus Odds)

The 2022 Honda Classic Field: By the Numbers (Plus Odds)