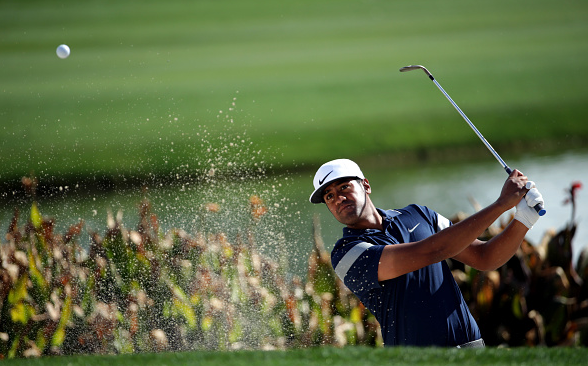 After winning his first PGA Tour tournament, Adam Hadwin has a very tough question to answer – honeymoon or the Masters? I think it was a fairly easy answer for Hadwin, who was asked about the honeymoon and responded with “sorry babe”.

Hadwin outlasted Patrick Cantlay with a par on the last while Cantlay bogeyed. Cantlay finished in second alone at 13-under and racked up enough cash from his sponsor invite to become eligible the rest of the year.

To wrap up coverage of the Valspar Championship, here are the 3 best shots from the week.

Over the course of his final two rounds, Hadwin’s putter was on fire. Hadwin made over 422′ 11″ of putts this week. The Canadian drained this 55-footer on the Par-3 15th for birdie.

Also, Hadwin had some of the same mojo on Sunday at the Par-3 13th, draining this 53-foot birdie that allowed him to hold on to his 1 shot victory.

Tony Finau had himself quite a Sunday, carding a 7-under 64 to finish inside the Top-5 for the second time this season. The 6’4″ Finau looked like he was on the basketball court while slam-dunking his bunker shot on the Par-3 8th.

Finau’s top-5 finish vaults him to 24th in the FedEx Cup race and 70th in the OWGR.

This looks like an above average chip shot but having tried this shot in the past, it is very complicated and Kuchar makes it look abnormally easy.

Wedge work … from the green.

Kuchar’s approach shot sailed and found the back left of the green which would’ve been nearly impossible to hit a putt close. Kuchar decided to go with the pitch shot over the bunker that finished to about a foot for an easy par.