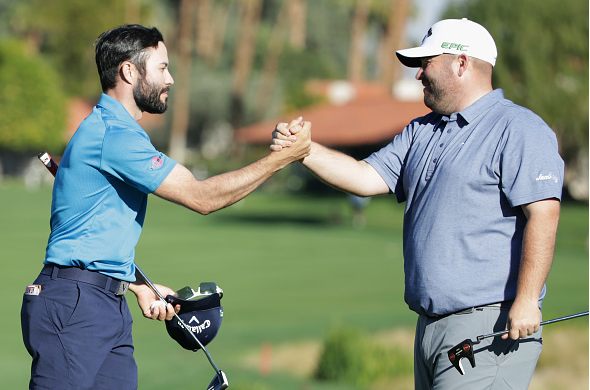 The third round of the CareerBuilder Challenge is in the books with Adam Hadwin taking over the lead after a 13-under 59 – the 8th 59 in PGA Tour history.

Hadwin has a one shot lead over first round leader, Dominic Bozzelli.

Hudson Swafford, Brian Harman, Bud Cauley and Chad Campbell all find themselves 2-strokes back at 15-under.

To wrap it the day, here are the top shots from the third round.

Adam Hadwin’s Par At The 18th

Canadian Adam Hadwin, provided the round of the day. By a landslide.

After hitting his approach shot on the 17th to a couple of feet, Hadwin had a putt to get to 13-under, and buried it.

Hadwin came to the 18th needing a birdie to tie Jim Furyk’s 58 – the best round in PGA Tour history. Unfortunately, Hadwin made par for a 59.

The stellar round moved Hadwin up 48 spots on the leaderboard, and will head into Sunday’s final round leading by one stroke.

Van Aswegen did not have the week he imagined and ended up finishing at 4-over, which missed the cut. However, Van Aswegen did provide some fireworks at the par-5 8th by holing his bunker shot from the green-side bunker.

He can hardly contain himself. #QuickHits pic.twitter.com/aal5tgpKZL

NFL Kicker Robbie Gould, made some moves on Saturday. Gould is known for making extra points and field goals but this week he provided plenty of birdies and great shots, including this putt from off the green at the 14th.