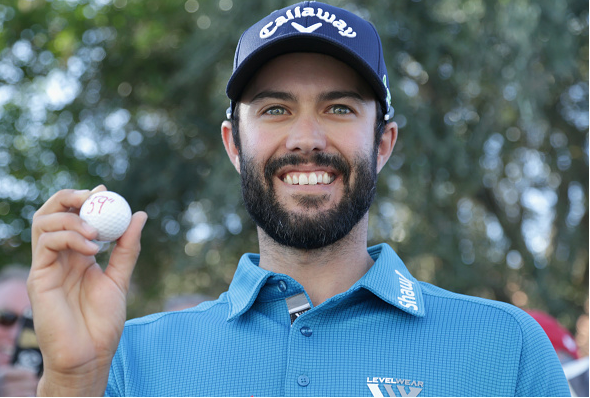 Geiberger, Beck, Duval. For seemingly forever, those three were etched in PGA immortality, permanently conjoined in bar trivia lore. They were the only members of the ultra-exclusive ’59 Club’ – an elite fraternity that nearly every PGA great had tried, but failed to gain admittance to.

Since 2010, however, the 59 club has added Goydos, Appleby, Furyk, and Thomas, and in doing so, the mystique slowly faded. Now, for the second straight week, they welcome a new member, this time 29-year-old Canadian Adam Hadwin.

Playing on the La Quinta Country Club Course, one of the three being used at this week’s CareerBuilder Challenge, Hadwin birdied an unbelievable 13 holes, tying a PGA Tour record and carding the latest 59.

The historically great round moved Hadwin into the CareerBuilder lead, giving him a one stroke lead over Dominic Bozzelli, and two over Hudson Swafford, Brian Harman, Bud Cauley, and Chad Campbell.

His back nine featured another birdie binge as he shot 1-under par on five consecutive holes, numbers 11-15, and then finished par-birdie-par for the magic number.

Hadwin, one of the shortest hitters on Tour, found some distance in round 3, averaging an impressive (especially for him) 304 yards off the tee, while still being accurate – hitting 12 of 14 fairways. He also had his best greens in regulation percentage of the week: 83% (15 of 18).

La Quinta Country Club was good to more than just Adam Hadwin today. Like Hadwin, South Korea’s Whee Kim started with a par and then birdied six straight. It wasn’t a 59, but his bogey-free nine-under 63 was the second best round of the day.

Despite being just one-under through two rounds, Kim is now at -10 and at least has a prayer being in a tie for 18th place.

Also at La Quinta, and also an international player, India’s Anirban Lahiri had six birdies on the back nine for an eight-under 64. At -11 for the tournament, Lahiri is in a tie for 11th, six back of Hadwin.

Bud Cauley, who shot a -7 and is now in a tie for third place, and Robert Garrigus, who is in eighth place after a third round 66 also moved into contention, and unsurprisingly, both played La Quinta on Saturday.

Second round leader Hudson Swafford looked to be putting himself in great position to win the tournament, playing his first 15 holes (at the Stadium Course) in 4-under and held the overall lead.

Unfortunately, a double-bogey, bogey, par finish led to a below average 1-under 71. Swafford is still only two strokes out of the lead, but could have been in much better position if not for his struggles on the final few holes.

No doubt the most popular player in the field, Phil Mickelson, who is playing his first tournament since two offseason hernia surgeries struggled at the Stadium Course and a double-bogey on 18 put him 1-over for the day. He dropped from sixth to 21st place and is now 8 strokes out of the lead.

Trying to bounce back from a nightmare 2016 season where he averaged worse than a 78 per round, Steven Bowditch finally did something he did not do once last season: shoot a round in the 60s.

A third round 69 (at La Quinta) followed up back-to-back 70s in round one and two has him in position for his best finish in some time. He might be well back of the lead (currently T43), but there are few players who should be more happy with the progress they have made in California this week than the Australian who has missed his last ten cuts.

“I don’t know, perfect I guess? I got away with a few shots on the back, and for whatever reason, any time I hit a putt, it went in. Everyone talks about being in the zone, it being your day, and it was my day.”
-Adam Hadwin, Third Round Leader and eighth player in PGA Tour history to shoot 59.