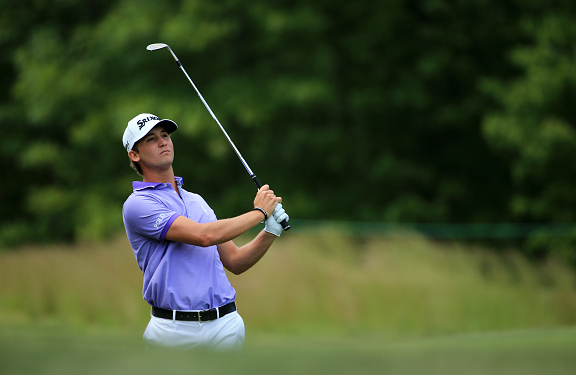 Following the BMW Championship, only the Top 30 in the FedEx Cup standings will get a ticket to East Lake and the TOUR Championship.

Here are 5 intriguing players to keep an eye on this week at Crooked Stick. They are all outside the Top 30 and need to have strong performances to move on.

Smylie has been a very streaky player this year. He has had great stretches, like when he followed up a T10 at the Frys.com Open with a victory at The Shriners Hospitals For Children Open, and a four event stretch in March-April where he finished T8 and T12 at tough events (the WGC-Cadillac and the Arnold Palmer Invitational, respectively) and played well enough at The Masters to make the final Sunday pairing.

He has also had very poor stretches, three times missing multiple cuts in a row. He had missed four cuts in a row coming into the Deutsche Bank, but played his first three rounds 68, 66, 68 to again, force himself into the final Sunday pairing. Unfortunately, Smylie shot a final round 76 to drop to T24. The question now is, which Smylie will show up at Crooked Stick?
Minimum Finish To Make Top 30: 19th

The long-hitting Finau, who is third on tour in driving distance (312.1 yards, trailing only Dustin Johnson and J.B. Holmes), has become a bit of a fan favorite since exploding onto the season at the 2015 PGA Championship.

Since the U.S. Open, Finau has only missed one cut, posting a T18 at The Open Championship, and has top 25s in the first two FedEx Cup events. He had his first career victory at the Puerto Rico Open in March.
Minimum Finish To Make Top 30: 11th

This one seems obvious since Rose was the gold medalist at the Rio Olympics, but it still warrants attention. Rose was the 2011 BMW winner, although that was not at Crooked Stick.

With that gold medal in hand, Rose’s season will be considered a resounding success regardless of what he does at the BMW, and that lack of pressure makes him very dangerous to the rest of the field.
Minimum Finish To Make Top 30: 3rd

Hurley III made one of the biggest moves of the week, jumping from #77 in the standings all the way to #51. The surprise winner at the Quicken Loans National said going into the week that he did not want to be a one-hit wonder, and subsequently posted a T8 at the Deutsche Bank, his second top-10 of the year.

Moving from outside the FedEx Top 70 cutoff to inside will likely give him plenty of confidence to do it for a second straight week. As a Navy grad, Hurley has shown that he can stare down anything and keep his composure.
Minimum Finish To Make Top 30: 3rd

Summerhays is not in top form, with three consecutive missed cuts going into this tournament, but as several players have shown us this year (namely James Hahn and Si Woo Kim), recent missed cuts are not always an accurate indicator of how a player will perform at any given tournament.

Prior to his missed cuts streak, Summerhays posted a solo-third at the PGA Championship and T11 at the following week’s Travelers Championship. He also finished T8 at the U.S. Open, showing a penchant for big-time events. Players who can putt can compete anywhere, and Summerhays ranks #7 on tour in strokes gained: putting.
Minimum Finish To Make Top 30: 3rd

Justin Rose Shoots 65, Leads Masters By Four After Round 1