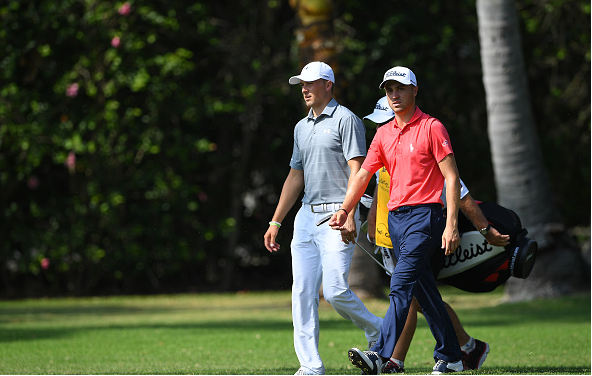 Jordan Spieth witnessed history during round one of the Sony Open when playing partner, and good friend, Justin Thomas fired a 59 to become just the seventh PGA Tour player to shoot a sub-60 round in tournament play.

Spieth, who himself had a nice round of 5-under 65, acted as part coach-part cheerleader for Thomas. After the round, Spieth spent time with the press to talk about the historic 18 holes.

1. Looking at your game in a moment, but I saw your reaction when Justin made that eagle to shoot 59, and you were so excited for him. What were your emotions, witnessing your friend do that?

Spieth: Oh, yeah, it’s history. It’s awesome. It’s really cool. To be able to watch it today, from our first hole, he chipped in about a 30-yard shot for eagle. I mean, he deserved it. His two best putts of the day, didn’t even go in. Really got robbed on a couple.

What an unbelievable 5-iron out of a fairway bunker from 200-plus yards. And really committing to that putt, a left-to-righter up the hill, that’s a very easy one when the nerves are on to leave start. And I could tell right when he stroked it, he liked it, and it held in there. Yeah, I celebrated more than he did. Man, it’s awesome. What an awesome last five rounds he’s had. Now it’s off to tomorrow I guess.

2. From your perspective, you’re trying to get your work done, go through your process. Is it difficult rooting through your friend and watching what he’s doing?

Spieth: It’s not difficult. We knew today this course was going to be as gettable — it’s going to be a very gettable golf course. The greens are softer. You can make some putts on them, and the fairways are running out. So you obviously have to plan accordingly and hit the right shots off the tee to keep the ball in the fairway.

Kind of figured that that would stick around, and then he went ahead and birdied 1 and 2. And then that’s when we all really — that’s when I started talking to Michael about it, and obviously it’s like sitting on a bench on the same team when a guy is throwing a perfect game. You want to say in the same rhythm you’ve been staying in the whole day. Certainly never bring it up.

And it was just — I was rooting for him. Every putt that was coming down the stretch, was rooting really hard. It was a huge par save back on 8 that kept his hopes alive, and just really, really happy for J.T. right now.

3. He was pumped when I asked him yesterday about playing golf with you and Bergs. What a special day from the studs.

Spieth: Yeah, definitely. It’s a good pairing. We actually played, us three, last week on the weekend before at Makena Golf Club on Maui. We had some fun in that round. We always do when we play together. Really excited about the pairing from the beginning of the week, and hopefully we can kind of continue what all of us did today, tomorrow. We were 21-under par as a group, so if we can duplicate that, maybe berg and I make up a little bit of ground, we’d be pretty pumped.

4. The other day, Justin talked about sort of being — annoyed is probably too strong a word, but obviously you had success very early and went to a very high level and he sort of felt the pressure of kind of trying to keep pace. What do you make of his start, obviously, to this year?

Spieth: It’s as fast as — it’s sped up, as well, the success he had quickly. He was — one of his good weeks away on the PGA TOUR versus, I went to Puerto Rico and had a good week and got status on the PGA TOUR my first year. He was one good timing week of having that and really being the same exact journey, and he spent a year on the Web.com. Very successful, came out here, wins quickly.

It’s nothing out of the ordinary. If it’s anything that he felt, it certainly wasn’t expressed. I think his route is extremely sped up, as well.

Same with Bergs, our whole class. There was no doubt, whether we believed it was as hard as it is or not, we just chose to shrug it off, and hey, we’re just going to go to the next level and the next level. It’s cool to have almost a dozen guys from our high school class out here on the PGA TOUR in their early 20s. It’s very rare. It’s very cool. Not only that, but also winning and obviously we’ve got a 59 now, first 59 out of our class.

Just really awesome for J.T., making history today. Fun to be a part of. What an amazing finish. I mean, he’s in the lip of the bunker walking up thinking he has to hit a wedge out and just try and make birdie. He saw Berger hit a 4-iron out. He goes, maybe I can hit 5 then. This is him explaining to me as we walked up to the green.

I don’t know how either one of them got 4- or 5-iron out of the lip of that bunker, but Justin hit it and he said, just be enough, and it lands on the front of the green. I’m like, no way did they both just hit the green out of that bunker. It was just a special putt to finish it out.

5. How many rounds do you think you two have played together since you were 13, and have you ever seen him have that much control of his golf ball?

Spieth: Certainly seen some striking like that but not the combination of the striking and just — I mean, he’s walking putts in from mid-range. You don’t normally see a combination of that, and when you do, they are really low rounds, obviously.

But I’ve certainly seen the control of the golf ball. He’s one of the best strikers and he’s also got a beautiful putting stroke. Sometimes it’s a little off on speed or line, and today, they were both on.

Don’t see it stopping off of today. I mean, he had quite a few putts that — his two best putts missed, and one of them was — I mean, I wish somebody — I wish there was a camera with my view on the putt that he hit on No. 7. I mean, it was ridiculous. I’ve never seen a putt that I thought was so sure that it was going in with just drip speed, somehow missed the cut. A bit unlucky there and I’m glad that it didn’t matter and he got it back.