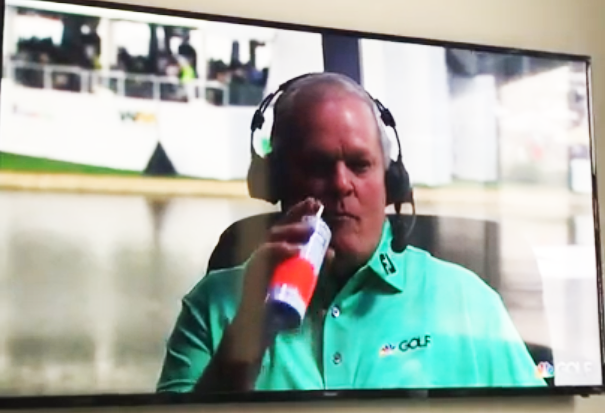 During the send off, however, Dan Hicks brought up an odd behind-the-scenes nugget about the acerbic analyst: Johnny Miller analyzed a lot of golf while sucking down Cheez Whiz in his bare feet.

The subject was actually brought up in a press conference on Friday, in advance of Miller’s final broadcast.

Hicks was asked about any of Miller’s quirks, such as former Golf Channel analyst Dave Marr’s affection for Mr. Goodbar candy bars.

“If had to single out one thing that I think typifies Johnny is and it’s going to sound crazy see but it’s cheese whiz. Easy Cheese Whiz, there’s a brand,” said Hicks.

“So Johnny would get in, I would look over there and he would have the nozzle of the cheese whiz thing implanted basically mainlining cheese whiz like — and I go, you’re actually sticking that in your mouth, so I said, the rest of us probably shouldn’t be using this.

“So our illustrious stage member, Kathy would actually put a piece of gaffers tape on it, on the cheese whiz bottle. So that’s just one of the many things. He broadcasts in his bare feet about half the shows.

“We have done 232 golf events and maybe a hundred of those have been in bare feet. But just I’m going to miss those as much as anything, all the little things, we have been, this week has just been, This Is Your Life and we have been just kind of going over all the great memories of having Johnny at 18 and, but I would say cheese whiz is at the top of the list, believe it or not.”

I mean how based is that!? Working the 18th tower on network TV in your bare feet with a can of Cheez Whiz has to be the ultimate not giving two f##ks.