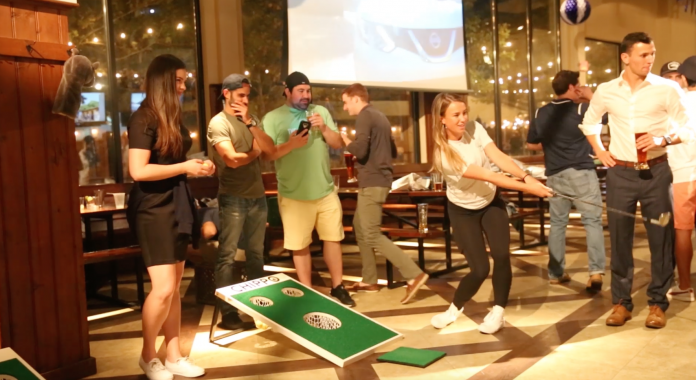 Earning “Best New Product” designation at the largest golf show in the world would be a desirable moment for any golf company. Doing it from the modest beginnings of a two-man startup built on a simple idea, originally conceived playing backyard games with beverages in hand, is almost too much to believe.

Yet that’s exactly where Chippo Golf finds itself today.

A recreational game similar to Cornhole, only based on chipping rather than beanbag tossing, Chippo was one of three Best New Product winners announced at the 65th annual PGA Merchandise Show, which wrapped up on Friday in Orlando.

The other winners honored were sportswear maker Tzu Tzu Sport, and high-end etched cutlery suitable for tournament prizes by Rhineland Cutlery. A group of 142 products entered, and were judged by a panel of PGA professionals and industry experts.

Chippo co-founders, and brothers-in-law, Brendan McAuley and Matt Moss from Hicksville, New York, would agree with describing their initial aspirations for Chippo as modest. That lasted until they launched their company in January of 2017 with a Kickstarter campaign. Their goal was to amass $12,000. They ended up with $234,000.

The demand for Chippo grew quickly, and within the first month of its launch, 1,200 units had been sold. The company reports buyers from all 50 states, and Canada, as well as a special request by a fan in London who planned a Chippo tournament as part of the wedding festivities.

Many attendees at the PGA Show commented how the concept was such a simple one, and McAuley and Moss admit they spent a lot of time searching through old patents, sure they would find something to derail their plans.

“We’re big backyard gamers and avid golfers, and one day, we were just in my backyard chipping some golf balls and we had the Cornhole set out, and I thought to myself, ‘Why doesn’t something like this exist?’ We did all the research and found out it didn’t, and decided to run with it,” explained McAuley.

Chippo may strike some as a bit of a lark, but when McAuley describes it as “an analog version of Topgolf,” he may be touching on just why Chippo is off to such a strong start.

Like Topgolf, you can compete several ways shooting at targets in competition with friends, including non-golfers. In Chippo’s case, it’s just played on a smaller scale, chipping off of a small mat using high-density foam balls, making it safe for indoor play.

Slanted target boards are set up opposite to each other similar to Cornhole, with four ways to score points. Adding a little extra incentive if you are way behind is a bonus that will double your points if your chip lands on the opposing team’s chipping mat and then bounces up on the board or into one of three target holes.

What it lacks in sophistication, Chippo makes up in versatility and convenience. It can easily be set up in a yard, at the beach, or even at a tailgate party.

Moss describes both he and McAuley as average golfers at best, but say Chippo has had a huge impact on short-game skill. “I can be dismal. But once I get around the green, 16 or 17 shots later,” he joked, “I’ve become money with my short game.”

A number of PGA professionals stopped by Chippo’s booth during the PGA Show and backed up that assertion. For instance, many are finding it to be an ideal tool to teach chipping at junior camps and clinics, because it’s both a fun and competitive way to learn the value of chipping basics.

As far as how big the market can grow, Moss says that if even one percent of the 35 million golfers in the United States like Cornhole and opt for Chippo, that would still be a lucrative market for the pair.

“Going back to the point about Topgolf, I think if there’s a trend in the sport, there are many younger people starting to get involved because of guys like Rickie Fowler, Jordan Spieth, Justin Thomas and other younger guys who are coming up more casually and less buttoned up,” says McAuley, who like his brother-in-law is in his early 30s. “This is another way that younger people, the Millennial generation, can get involved in golf in a way they’re comfortable with.”

A Chippo set retails on the company’s website, Chippogolf.com, for $189.99.

Inside Look: The PGA Show