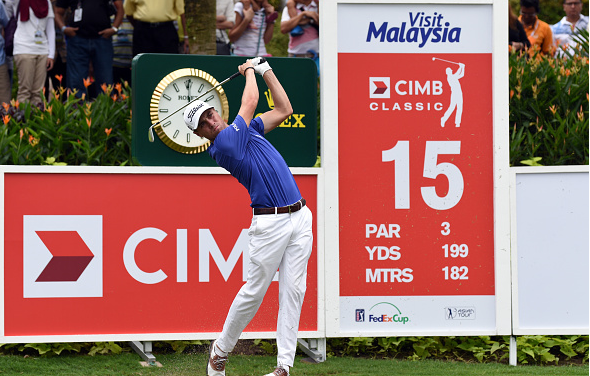 The 2016-17 got off to a long, wet, but exciting finish in Napa Valley, where Brendan Steele made the first big move of the new season, riding a final round 65 to a one-stroke victory at the Safeway Open.

These early tournaments may lack the importance and drama of the majors, but as we saw last season with guys like Emiliano Grillo and Justin Thomas, October success can carry over to the season at large.

This week, the PGA Tour goes to it’s most exotic location: Kuala Lumpur in the paradise that is Malaysia for the CIMB Classic. With 78 golfers, it is one of the smallest fields of the year. But what it lacks in numbers, it more than makes up for in quality.

Along with Thomas, the defending champion who recently finished 12th in the final 2016 FedEx Cup standings, is one of the many big names in a field highlighted by Sergio Garcia, Paul Casey, Ryan Moore, Adam Scott, and Patrick Reed, among others. Factoring location and field quality, there is nothing on Tour quite like the CIMB Classic.

The CIMB Classic was first played in 2010, with Ben Crane taking the title at the inaugural tournament. It is considered an official event on both the PGA and the Asian Tour. From 2010 to 2012, the tournament was hosted by the MINES Resort & Golf Club. It has been played at TPC Kuala Lumpur since 2013, and has a $7 million purse, while awarding 500 FedEx Cup points to the winner.

TPC Kuala Lumpur was founded in 1991, but the West course, as we now know it, was re-designed and re-opened in 2008. It is considered one of the best, and one of the most scenic courses in Southeast Asia.

The defending champion of the CIMB Classic is Justin Thomas. At the 2016 CIMB, Thomas held off a furious rally by Adam Scott, who shot a final-round 63, to win by one stroke. Thomas made waves on Friday with a course-record tying 61 to take the 36-hole lead.

Scott had passed Thomas briefly on the back nine after Thomas double-bogeyed the 14th, but birdies on 15, 16, and 17 put Thomas back ahead, and at 26-under, the course record, Thomas scored his first career PGA Tour victory.

Lowest Final Score: The CIMB record is 261 set in 2011 by Bo Van Pelt at The Mines. Justin Thomas set the TPC Kuala Lumpur record last season with a 262.

Justin Thomas did not come out of nowhere to be good, as he was incredible in the second half of the 2015 season, but last season’s CIMB Classic was his coronation as one of the best golfers on Tour.

The CIMB was his only win in 2015-16, but he had a number of other high finishes, including third place at The Players Championship, the PGA Tour’s flagship event, and top 10s at two FedEx Cup playoff events (T10 at The Barclays, T6 at the Tour Championship).

The 23-year-old Thomas has also become one of the more popular names on tour, largely due to his playful, outspoken nature, and his close association with Jordan Spieth and Rickie Fowler.

There’s no reason to think that Thomas can’t play well in Malaysia and parlay that into another exceptional season. He is almost to that point in his career trajectory where he is expected to be in the mix at majors.

Paul Casey has taken his game to a new level as of late. He was in the midst of a relatively modest 2015-16 season, becoming a fixture in the 60s and 70s of the FedEx Cup standings. Since a T10 at the PGA Championship, however, Casey has been on absolute fire: he finished solo-second at both The Deutsche Bank Championship and the BMW Championship, followed by a solo-fourth place at the Tour Championship, and then a T3 at least week’s Safeway Open.

That means four top-fours in his last four events! In his two previous appearances in Malaysia, he has not done anything special (T37 in 2014, T24 in 2015), but in his current form, he is definitely one of the biggest names to watch. Formerly a streaky player with prodigious ups and downs, Casey is playing the most consistently great golf of his career.

Ryan Moore has been one of the biggest stories in U.S. golf over the past two months, and combines tremendous current form, with previous CIMB success, winning both the 2014 and 2013 versions of the event. Moore won the John Deere Classic in mid-August and has more recently added a T7 at The Barclays, a T8 at the Deutsche Bank, and a T2 at the Tour Championship, where he battled Rory McIlroy in a thrilling playoff that he would lose after four holes.

The hot streak could not have come at a better time, and Moore was named the final Captain’s pick for the Ryder Cup. Moore proved to be an asset in the American’s winning effort, going 2-1-0 overall, with a win in Sunday Singles over 10-time Ryder Cupper Lee Westwood.

The first punch of the 2016-17 PGA Tour season was delivered by Brendan Steele, who birdied the final three holes on Sunday to vault past Paul Casey, Patton Kizzire, and Scott Piercy among others and claim victory at the Safeway Open. In three of his four rounds, he shot 67 or better, and if he brings that same game to Kuala Lumpur, we could be witnessing a two-tournament winning streak to start a new season. He is coming off a decent 2015-16 where his best finish was a T3 at last year’s CIMB Classic. He was T25 at his other appearance in Malaysia in 2013.

Last season, Steele was great off the tees, but struggled on and around the greens. The flatstick was working for him at the Safeway (finished 6th in strokes gained: putting), and if he can keep that putting momentum going, he will likely post another high finish in Kuala Lumpur.

Being co-sanctioned by the Asian Tour, there are a number of international players worth keeping an eye on. For the purposes of this space, we are going to highlight three.

The Australian Fraser was not well-known in the states, but changed that with a breakout performance at the Olympic Games in Rio. He ended up not medaling, but held a three-stroke lead after the first round, a lead he would hold until Saturday when an average weekend pushed him down to T5. His first round 63 is the current Olympic record.

Fraser plays mostly in Europe and Asia, where he has six career wins, including a victory at the European Tour’s Maybank Championship in February, which coincidentally, takes place in Malaysia. He is currently 2nd in the Asian Tour’s order of merit.

One of the most popular international players on the PGA Tour, the ostentatious Poulter has not been his best over the past two seasons. In 2015-16, he had only one PGA finish in the top 30, and then sat out the last four months of the season with a foot injury. As of the best European Ryder Cup players ever, it had to be excruciating for him to have to sit out this year’s version, although he was named a co-captain.

Poulter made his return last week at the Asian Tour’s Macau Open, sharing the first round lead before struggling Friday-on and finishing in a tie for 28th place. The tournament was won by Thailand’s Pavit Tangkamolprasert. The CIMB is important for him, as he has a money total he needs to hit for his injury exemption to keep his Tour card.

This will be the PGA debut for Wang of South Korea, who has played well in both Europe and Asia.

He is currently 4th in the Asian Tour’s order of merit, and in Europe, he won back-to-back tournaments in May. Wang is currently the world’s 91st ranked golfer.

Not especially well-known outside of Europe, Cabrera-Bello was tremendous at the Ryder Cup, with an overall record of 2-0-1. His 2.5 points was third-best on team Europe, trailing only Thomas Pieters (4) and Rory McIlroy (3).

The Spaniard had a number of great finishes in 2015-16, including a third place at the Dell Match Play and a T5 at the Olympics.

Reed is another player coming in hot, as he won the Barclays, finished third in the final FedEx Cup standings, and was inarguably America’s best player at the Ryder Cup, leading the U.S. with 3.5 points, including a phenomenal 1-up victory over superstar Rory McIlroy in Sunday singles.

Reed finished the 2015-16 PGA Tour season with 11 top 10s, a number surpassed only by Player of the Year Dustin Johnson.

Last season’s CIMB runner-up, Scott is hoping to get his season off to another hot start. In 2015-16, he had two victories and two runner-ups in his first seven events. He was quiet mid-season, but got on another streak at the end of the season, finishing T4, 4, T4, T8 in his final four events.