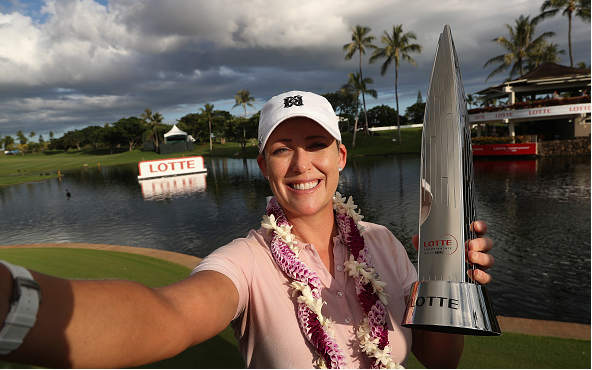 Cristie Kerr followed up her record-setting 10-under 62 with a final round 6-under 66, and captured the LOTTE Championship at Ko Olina Golf Club. It was Kerr’s 19th win on the LPGA Tour and first since the 2015 Tour Championship. The 39-year-old Kerr finished her final 52 holes in Oahu without a single bogey.

Su-Yeon Jang, the 54-hole leader, shot an even-par 72 and finished at 17-under, three stroked behind the leader Kerr.

Rounding out the top-5 was Canada’s Alena Sharp, who shot a final-round 2-under-par 70 final to finish solo-fifth at 16-under-par.

Kerr becomes the second American this season to win on the LPGA Tour – joining Brittany Lincicome, who won the season-opening Pure Silk-Bahamas LPGA. The win in Hawaii earned Kerr $300,000 in prize money, and moved her into the top-10, at No. 8, in the Race to the CME Globe.

“It feels amazing. You know, on Friday morning I wasn’t playing too well and then I just found something and was able to turn it on and I just kept it going. I can’t remember two and a half days after I struggled with my swing feel, and then made so many birdies in my life. It was an unbelievable run.”
–Cristie Kerr, LOTTE Championship Winner