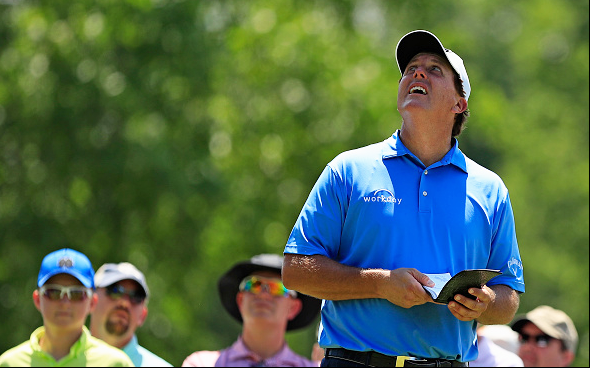 In today’s edition of the PGW Daily Rundown, Phil Mickelson is hoping for storms to hit Wisconsin on Thursday; Brandt Jobe ends a very long winless streak; Kevin Na takes a harsh tone with the USGA; Davis Love III finds a new job; and Ariya Jutanugarn becomes the new No. 1 in women’s golf (we think).

It took 403 tries, but it finally happened: Brandt Jobe won a tournament as a PGA Tour professional. On Sunday, Jobe held off Kevin Sutherland and his former college roommate Scott McCarron to win the Champions Tour’s Principal Charity Classic by one stroke.

“This is nice. It’s a little bit of a relief.”
–Brandt Jobe

Phil Mickelson recently announced that among the events on June 15th that he has been invited to, he will be going to his daughter’s high school graduation in Carlsbad, California.

His other potential engagement, the U.S. Open is a maybe, and according to Mickelson, it is a longshot. At a post-round interview at the FedEx St. Jude Classic, where he finished ninth, Mickelson suggested that to make his tee time at Erin Hills, he will need at least a four-hour weather delay.

“I need a minimum four-hour delay, most likely. That’s the way I’ve kind of mapped it out.”
–Phil Mickelson

Mickelson Crumbles After Realizing He Was Tied for Lead

Speaking of Mickelson, he has an exceptional history at the FedEx St. Jude Classic, and added another top 10, finishing solo-ninth after a two-under 68 on Sunday. It could have been much better, however.

Mickelson birdied five of his first 10 holes, and through 11 holes was suddenly tied for the lead. Standing on the 12th tee box, Mickelson looked at a leaderboard and realized he was a leader.

As a result, he lost his focus and triple-bogeyed the par-4. Mickelson has won 42 times on the PGA Tour, but has been stuck on that number since his surprise triumph at the 2013 Open Championship.

“I’m playing really well. But because it’s been a while, I’m not as sharp as I need to be,” Mickelson said. “That’s the challenge that I’m at right now, because the physical game is as good as it’s been when I’ve won a bunch of tournaments, but I’m mentally not as sharp and made some mistakes.”
–Phil Mickelson

Both Davis Love III and his son Davis Love IV, who goes by “Dru” attempted to qualify for the U.S. Open last week in sectional qualifiers. Love III didn’t qualify, but Dru was named an alternate.

Dru, 23, made the field when the last few spots were named after the FedEx St. Jude Classic, and will have a familiar face on the bag for his first career major: Davis Love III.

The USGA has come under a lot of scrutiny in the past few years, and with the U.S. Open set to tee off in just three days, players have again been speaking out against course conditions. This time, it’s Kevin Na, who posted a video showcasing the extreme rough at Erin Hills, the site of this year’s open.

Inferring that the USGA is making the course extra difficult just for the sake of being difficult, Na tossed a ball just a few feet off the fairway, where it was completely devoured by the unbelievably thick rough.

“Erin Hills is a great design course but the fescue is almost unplayable. BTW never found the ball. So don’t hit it in there lol. Straight hitters have a chance! #usopen #erinhills #mikedavis #lostball #usga”
–Kevin Na via Instagram

Jutanugarn Wins in Canada, Set to Claim No. 1 Ranking

After last week’s Shoprite LPGA Classic, it was widely reported that Ariya Jutanugarn would take over the #1 spot in the Rolex Rankings, the women’s version of the OWGR, usurping Lydia Ko, who had held the top position for 84 weeks.

Once the math was officially tallied, it turned out that Ko still held the #1 spot, barely. This week, however, there should be no question. After winning the Manulife LPGA Classic in a playoff that featured three of the world’s top five, Jutanugarn is assured to become #1 for the first time. It is the first win of the season for the 21-year-old prodigy from Thailand.

“To be honest, I didn’t pay attention with the ranking. I only want to go out and have fun.”
–Ariya Jutanugarn