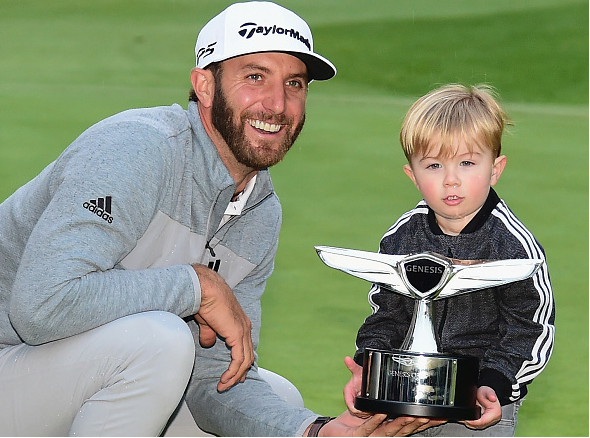 Dustin Johnson’s breakthrough win at Riviera was important on many fronts: It marked the tenth straight season with a PGA Tour win (the most, by far, for active players); it increased his career earnings to $41,058,345; and more importantly, at least for bragging rights (and sponsorship equity), it moved him into the lofty position as the world’s #1 golfer.

It’s only fitting that DJ became world #1 at Riviera, as it’s arguably the place where he started his journey to become the world’s top-ranked golfer.

After finishing 41st at the 2016 AT&T Pebble Beach Pro-Am, DJ entered the Genesis Open (then called the Northern Trust Open) as the world’s 8th ranked golfer. He was known as an all-world talent, who had all the tools, but couldn’t win the big one – and who, at 31 years-old, despite a stellar PGA Tour player, was still seemingly under-performing.

At the time, all the buzz was about the so-called Big Three (Jason Day, Jordan Spieth, and Rory McIlroy).

DJ would quietly finished in 4th place at Riviera, where he would say, “Everything’s going how I’ve been planning it to go.”

And that plan included FOUR top-5 finishes over his next 5 starts with the other finish being a T13.

One of those top-5s took place at Augusta, where DJ commented on being a great player, but not living up to his talent.

“I mean if your name’s getting mentioned, best player, whether, you know, whatever comes after that, is usually pretty good,” Johnson said. “You know, I still feel like my time’s coming. I’ve just got to keep putting myself in position to have a chance to win. One of these days I will get it done.”


Following a T28 at THE PLAYERS, Johnson then went on a run where he finished NINE times inside the top-10 in just 11 starts – with 3 of those finishes being WINS, including his first major at the U.S. Open.


DJ started the 2016-17 season with a mediocre T35 in China at the WGC HSBC. But since then, over a stretch of six starts, he’s finished in the Top-3 FOUR TIMES, capped off by the win this week at Riviera.