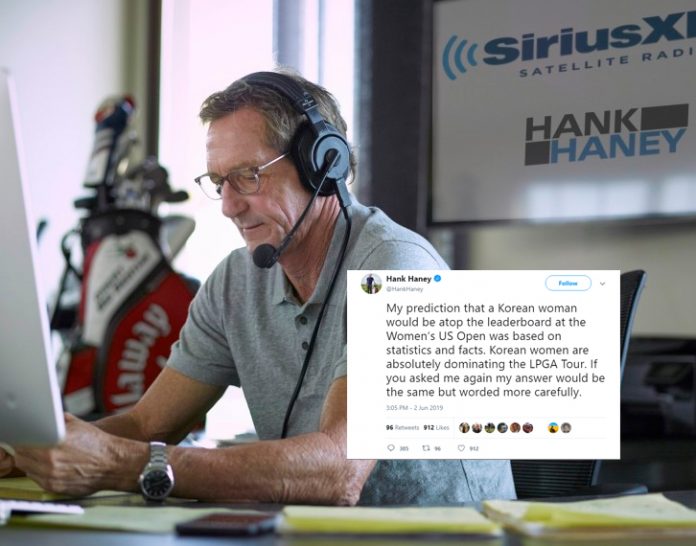 As many readers know, Hank Haney was suspended by SiriusXM from his popular satellite radio show for comments called “insensitive” (others called them racist and sexist including Michelle Wie).

During a predictions segment on his radio show, Haney admitted he doesn’t follow the LPGA (which seemed like his biggest sin), so when asked to make a pick for the U.S. Women’s Open, he joked that he’d “predict a Korean.” He went on say that he couldn’t “name like six players on the LPGA Tour,” and then joked that maybe, he’d “go with Lee,” but couldn’t come up with a first name.

Naturally, after the PC Police (aka media activists) blew up the story, forcing Haney’s suspension, a Korean named Lee won – Jeongeun Lee6 to be specific, which made it even more ironic since the “6” on her last name is due to five other players with the exact same name (first and last) on the Korean Tour.

It was the media’s worst nightmare.

After virtue signaling all weekend about the “diversity” of the LPGA, with skewed photo collages, the bottom-line was that another Korean won. It’s not racist to use statistics. It was the seventh Korean victory in 13 tournaments thus far (54%). Americans own one win, along with one each for Japan, Australia, England, Canada, and France.

If you had to guess a winner of a LPGA tournament using the above data, you’d be dumb not to “predict a Korean.”

My prediction that a Korean woman would be atop the leaderboard at the Women’s US Open was based on statistics and facts. Korean women are absolutely dominating the LPGA Tour. If you asked me again my answer would be the same but worded more carefully.

This sent the media into another conniption fit.