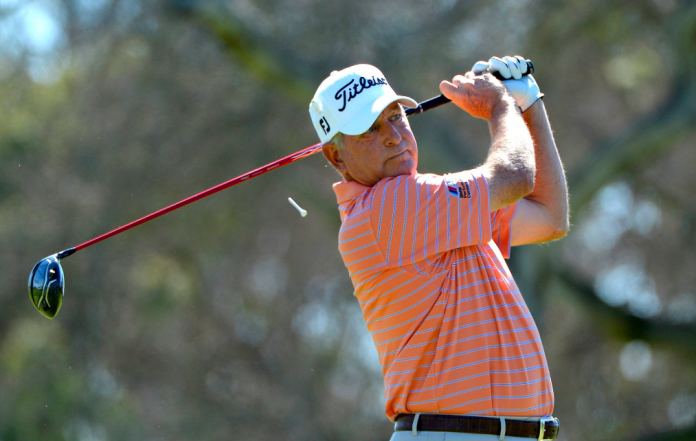 Jay Haas shot a sizzling 8-under 63 on Saturday at the Toshiba Classic, and heads into Sunday’s final round holding a 5-shot lead over Fred Funk.

A win on Sunday would make Haas the second-oldest winner in PGA Tour Champions history. Only Mike Fetchick, 63 at the time of his 1985 win at the Hilton Head Seniors Invitational, would top Haas.

Jay Haas is rolling the ball.

He leads by 2 at the turn. https://t.co/AWHqzsSMnI

Haas will be exactly 62 years, 10 months, and 7 days when he tees it up at Newport Beach CC on Sunday .

“I don’t know what’s gotten into me other than — and I’ve always said the ball doesn’t know how old you are or what your name is or anything like that — if you hit a good shot, it goes right down the middle and on the green and in the hole,” Haas said. “So, I’m not trying to think about being old or anything like that. I feel good, I feel positive with my swing. I’m not doing it with smoke and mirrors.”

"I'm getting a little bit more comfortable with it each time." https://t.co/kg2XVY9bEI

“Basically, one-handed the last six holes,” Daly said. “Hopefully, get some ice on it and get the swelling down.”

Red, white and BOOM! @pga_johndaly is T-3 heading into the final round of the #ToshibaClassic ??

The final round will be broadcast on the Golf Channel at 6 PM (EST).