The WGC-Bridgestone Invitational might boast an unbelievable field, highlighted by the entire top 50 of the Official World Golf Rankings (OWGR), but many viewers will be keeping an eye on Akron for one reason: Jordan Spieth. 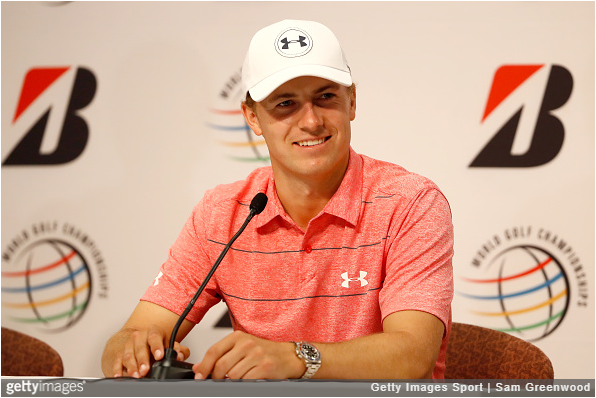 This tournament will be the newly-minted Open Champion’s first since taking down an elite field at Royal Birkdale two weeks ago.

During a Wednesday press conference, Spieth said he feels rested and prepared for the final stretch of the season.

“I actually feel rejuvenated and ready to go, which after what happened at Birkdale, might be kind of hard to believe, it kind of takes a lot out of you,” said Spieth. “But we’ve got significant goals that we have yet to achieve this year for the rest of the season.”

The week at Firestone will also be the 24-year-old’s last competitive action before he attempts to become the youngest ever to win the Career Grand Slam, when he tees it up at Quail Hollow for the 99th PGA Championship.

With three wins on the season, though, including two of the most viral in recent memory, Spieth feels, at this point, he’s playing with house money.

“I feel like I’m free-rolling now. Not that I shouldn’t have before, but after Pebble and before Hartford, it’s just I feel like I’m playing well enough and should be having better results for more chances to win,” said Spieth. “And I get off to two good starts in tournaments and been able to close them out.”

Although the greatness of the world No. 2 has been widely recognized for several years now, his profile reached new heights following dramatic back-to-back wins: the viral bunker hole-out at the Travelers, followed by the landmark Open Championship win.

Spieth had not won a major since taking the first two in 2015 (The Masters and The U.S. Open), and his back nine meltdown at the 2016 Masters led to questions about the state of his mental game, questions that persisted over his next five major starts.

“It’s just the mental side of how majors affect you when you put such an emphasis on them and you know what kind of history that that creates and that’s your goal in what you love to do,” said Spieth.

Now, the narrative has gone from “What’s wrong with Spieth?” to discussions on how his legacy already stacks up against the all-time greats.

His confidence may be as high as it ever has been, and it will be undeniably exciting to see how that carries over into this week’s WGC event.

“I’m excited to get started here at Firestone. The course is extremely pure. Hopefully we don’t get a ton of rain because it’s playing just perfect right now,” Spieth said.

If he wins, he will be heading into the PGA Championship on a three-tournament victory streak. The juicy storylines and media attention would reach a level we have not seen since Tiger’s prime.

Spieth finished T3 at last year’s WGC-Bridgestone, shooting a final round 67 to finish three strokes behind Dustin Johnson. He was also T10 at the 2015 edition, saving his best round for Sunday.