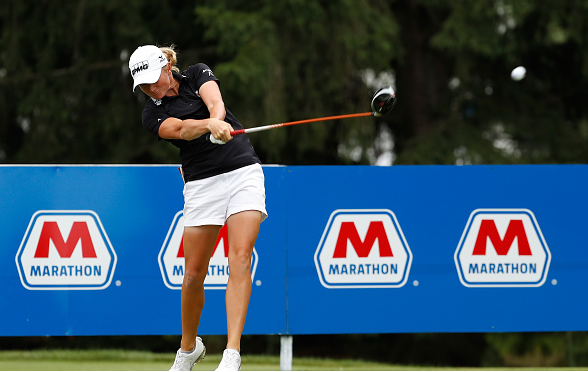 With the U.S. Women’s Open in the books – the third major of the season, the LPGA Tour has officially completed three-quarters of its 12-week summer marathon.

And the aptly titled, Marathon Classic Presented by Owens Corning and O-I, marks the beginning of the final three-tournament lap.

The Marathon Classic presented by Owens Corning and O-I was first held in 1984 at Glengarry Country Club (presently Stone Oak Country Club), and remained until 1988 when it moved to its current venue, Highland Meadows Golf Club.

The tournament reportedly began as a dream of Toledo native, Judd Silverman. In 1982, then working as a PGA Tour caddy, Silverman came up with the idea of bringing an LPGA tournament to the Toledo region.

After getting approval from the tour, and working out the logistics, Silverman, himself, secured the tournament’s first 12 founding sponsors, which covered the inaugural tournament’s full purse (then just $175,000).

Actor Jamie Farr agreed to lend his name to the event and brought his celebrity friends to the tournament, while the Toledo area McDonald’s franchises underwrote the operating expenses with the agreement that a portion of the money raised would benefit the Ronald McDonald House.

Since 1984, the tournament has donated millions of dollars to local children’s charities.

Built in 1925 by Sandy Alves, Highland Meadows Golf Club will play to a par-71 championship, measuring just over 6,500 yards for this week’s Marathon Classic.

In addition to Park, there will be 29 other rookies in the field, headlined by rookie stars Angel Yin, Nelly Korda, and Emily Pedersen.

In 2016, Lydia Ko won her second Marathon Classic title in a playoff against Mirim Lee and Ariya Jutanugarn. It was Ko’s fourth victory of the 2016 season. The former World No. 1 shot a final-round 2-under-par 69 to capture her 14th LPGA Tour victory.

Ko arrives in Ohio seeking her first win the 2017 season. Her best finish this season is a runner-up at the LOTTE Championship. The 20-year-old Ko does have seven top-10s in just 14 starts, and feels she’s played solid, despite the lack of trophies.