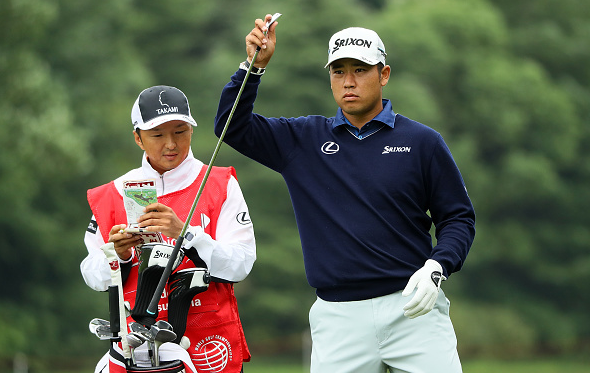 There may not be any birdies left in China, because Hideki Matsuyama has taken them all. Adding nine birdies in round two, which was actually one fewer than he had after round one, the Japanese young gun, Matsuyama, shot a 65 to lead the WGC-HSBC Champions in Shanghai, China by three over Bill Haas and defending champion Russell Knox.

The eye-popping 19 birdies have Matsuyama at -13 for the tournament, easily the best first half of anyone in the field. Matsuyama is showing a penchant for Asian events, as he finished second to Justin Thomas in Malaysia just last week.

A birdie binge like the one Matsuyama has been on through two days would have nearly anyone in the lead. He is threatening to lap the field in that statistic. He has also been finding greens, hitting 16 of 18 in regulation during his second round.

The hot iron play has helped to offset surprisingly poor drives, as Matsuyama only hit five of 14 fairways on Friday. Just 24 years of age, Matsuyama, a former champion of both The Memorial and the Phoenix Waste Management Open, has looked on the verge of elite in recent years, although the 2015-16 major season was as up-and-down as they get, with two top 10s (The Masters, PGA Championship) and two missed-cuts (U.S. Open, Open Championship).

Rory McIlroy, one of the hottest golfers on the planet at the moment after winning the $10 million FedEx Cup and playing very well in a losing effort for the Europeans at the Ryder Cup, looked ordinary in round one, carding a modest one-under 71.

Round 2 was a completely different story as seven birdies to just one bogey led to a six-under 66, a round that was eclipsed only by Matsuyama. The 66 was matched by Matt Kuchar, who was one-over after round 1. The Olympic bronze medalist now sits in a tie for 13th place.

The question golf fans everywhere had after round one was, “who the heck is Rikard Karlberg?”. The relatively anonymous Swede was the first round leader after a nearly flawless eight-under 64. Karlberg kept the hot play going through nine holes in round 2, staying ahead of the pack with a front nine 34 (-2), but he came completely unraveled on the back, making a mess of the par-4s on his way to a 41 (+5).

The immensely popular Rickie Fowler was in great position after the first round, playing better than anyone not named Karlberg, but it was a different story on Friday. Fowler had three bogeys in his first five holes, and finished with a one-over 73. He now sits seven strokes out of the lead, after being behind by a single stroke after round 1. Patrick Reed, arguably the American MVP of the Ryder Cup, is now miles behind, adding a three-over 75 to his dreadful round one 78 (+6).

Reed is now in a tie for 73rd place in the 78-man field. One of the few players he is ahead of is PGA Champion Jimmy Walker, who shot in the high 70s for a second straight day (+7 in round two, +13 overall).

Player of the Year

Just a few weeks ago, Dustin Johnson was sitting on the top of the golf world after being a landslide choice for 2015-16 Player of the Year. The U.S. Open Champion appears to be having somewhat of a hangover, shooting a second consecutive 2-over 74.

At four-over for the tournament, DJ is in an unfamiliar place, 17 strokes out of the lead.

“He’s a heck of a player, and just really must have played nice golf. Because I didn’t lose many shots out there; I made some nice par saves and some nice putts, some 15-, 20-foot putts, just to shoot 4 or 5-under. For him to shoot 7, or be 13-under, that’s really, really impressive”.
–Bill Haas, who is three shots behind leader Hideki Matsuyama.