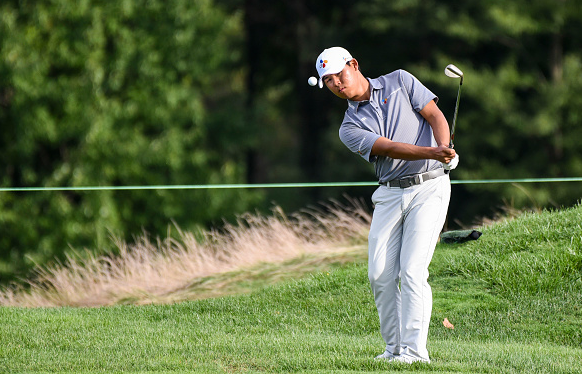 Only in the convoluted, secret sauce methodology world of the PGA Tour, could a pro golfer, who earned his card in 2012, be deemed a rookie with 2 weeks to play in the, um, 2016 season.

You see, according to PGA Tour’s ridiculous rules, a player’s rookie season would never be defined in any simple to understand kind of way. Like, I don’t know, maybe the season in which he first plays on the PGA Tour with a new PGA Tour card.

Wait. It gets better.

The reason Kim only played in 8 events during his rookie year is because rules prohibit a player under 18 from being a PGA Tour member even if they earned a PGA Tour card. Kim had his card but didn’t turn 18 until June 28, 2013. His first official event as a member was not until the Greenbrier Classic in early July.

Here is Kim’s Profile at PGATOUR.com. This should clear it up a bit:

Finished T20 at the Qualifying Tournament but did not turn 18 until June 28, 2013, and because of PGA TOUR rules could not become a TOUR member until then. He was eligible for no more than 12 TOUR events as a non-member on sponsor exemptions (with a maximum of seven), top-10 performances or special exemptions prior to the date he became a regular member. Monday qualifiers did not count toward the 12 events, and he could Monday-qualify into an unlimited number of events.

No wonder why the PGA Tour itself was confused and never listed Si Woo Kim in its own tracking of the 2016 ROY.