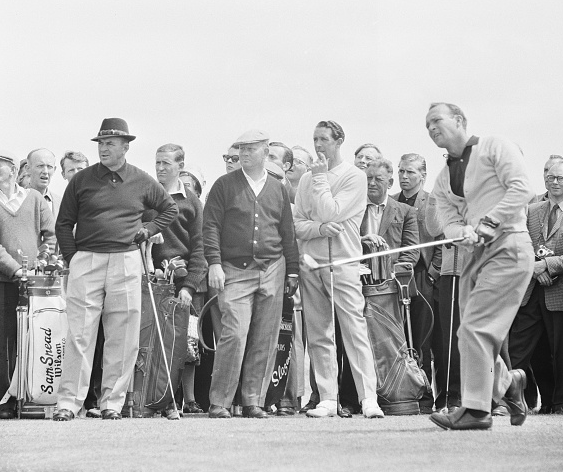 The Old Course at Royal Troon has played host to eight Open championships. From the legendary Arnold Palmer in 1962 to the most improbable winner of all, Todd Hamilton in 2004, the 137-year old golf course has seen it all.

In honor of The Open returning to Troon, here’s our ranking of its past champions.

Palmer entered the 1962 Open Championship at ‘Troon’ (it became Royal Troon in 1978) as the defending champion, having won in 1961 at Royal Birkdale.

The 32-year-old Palmer was at the tail end of what’s considered the greatest 3 season stretch of his illustrious career. He was simply dominant.

From 1960 through ’62, three tour seasons, Palmer won five of his 7 major championships, along with 17 regular PGA Tour events, totaling 24 titles in all. He was named the Player of the Year in both ‘60 and ’62.

Palmer won by a comfortable six strokes at Troon with a 12-under par, a record at the time. Palmer gained control late in round two, and by the end of Saturday’s round three, The King was up 5, and would cruise to a second consecutive Open victory.

Palmer is a Hall of Famer and considered to be one of the greatest golfers of all time, winning 62 times on tour. The beloved icon hosts one of the most prestigious events on the PGA Tour schedule, the Arnold Palmer Invitational, at Bay Hill in Orlando, Florida. The two-time Open winner is also well known outside of golf for his famous mix of iced tea and lemonade, otherwise known as an “Arnold Palmer”.

Watson took home his fourth of five Open Championships at Royal Troon in 1982 with a one-shot victory over Peter Oosterhuis and Nick Price.

Watson started the weekend 4-under par, seven strokes behind 22 year-old Bobby Clampett (-11), and then proceeded to shoot a 2-over for round three. But Clampett struggled to a 6-over 78, which left Watson only 3 shots off the lead. Watson fired a final round 2-under 70 and outlasted late runs from Price and Oosterhuis to grab the Claret Jug. Clampett would struggle again on Sunday, carding a final round 77, and his once-promising career would never recover.

The Hall-of-Famer continued to play for many more years, winning 39 times on tour, including 8 majors. From 1978-1983, five tour seasons, he was ranked as the number one golfer in the world. He cemented his legacy as arguably the greatest links golfer of all time when he nearly won his sixth Open in 2009, at the age of 59. A missed par putt on the final hole put him in a playoff with Stewart Cink, who would go on to win. Watson also won three Senior British Open championships. The 8-time major winner is regularly ranked as one of the 10 greatest golfers of all time.

South African Bobby Locke is considered the first great non-American, non-British golfer. After World War II, Locke befriended Sam Snead, and joined the PGA Tour in 1947. In only 59 U.S. tour starts, from ’47 to ’49, Locke won 11 of them, finished 2nd in 10 others, 3rd eight times, and fourth five times.

American tour golfers were reportedly so jealous of Locke’s winning ways that they concocted a flimsy excuse to ban the South African from the tour. Claude Harmon, the legendary club pro at Winged Foot, and winner of the 1948 Masters, stated, “Locke was simply too good. They had to ban him.”

In 1949, Locke recorded his first Open championship at Royal St. George, and defended it at Troon in 1950 with a then record one-under-par final score. Roberto De Vicenzo finished two strokes back at +1. Locke, Vicenzo, and Dai Rees were all tied after the third round, but Locke was able to best his competitors with a final round 68.

Locke is known for coining the phrase “drive for show, putt for dough”, as he is thought to be one of the greatest putters to ever live. He won 15 times on tour, and the Hall of Famer passed away in 1987.

The 1973 Open at Royal Troon was Weiskopf’s only regular tour major, but he won it wire-to-wire, tying Arnold Palmer’s record of 12-under. Neil Coles and Johnny Miller were the next closest at -9.

Weiskopf won 16 tournaments in total on the PGA Tour, and 4 more on the Champions Tour, including its biggest major, the U.S. Senior Open. He was also a member of the 1973 and 1975 U.S. Ryder Cup winning teams. Weiskopf now designs golf courses, and works as a TV analyst for ABC and ESPN.

A 25-year-old Leonard was five shots back entering the final day, but shot a final round 65 (-6) to win by three strokes over Jesper Parnevik and Darren Clarke. Following his win at Royal Troon, Leonard regularly appeared in World Top 10 rankings, up through 1999. The Open at Troon, however, was Leonard’s first and only major championship.

Leonard, now 44, has 13 PGA Tour wins, and still plays on the tour, although he hasn’t won since 2008. Leonard was also a member of the 1997, 1999, and 2008 U.S. Ryder Cup teams. The Dallas, Texas native famously sunk a 44-foot putt to complete an improbable comeback over the Europeans during the historic ’99 matches at the Country Club in Brookline.

His prime was short, but from 1988 through 1990, Mark Calcavecchia was considered one of the best golfers in the world, regularly ranking among the world’s Top 5-10. In 1989 “Calc” achieved his only major championship here at Royal Troon in a playoff with Wayne Grady and Greg Norman. Norman would shoot a course record 8-under 64 on Sunday to get into the playoff. But Calcavecchia carded two birdies in the four-hole playoff to win the Claret Jug.

Hamilton won his only major championship in one of golf’s all-time upsets when he defeated Ernie Els in a four-hole playoff to win The Open Championship at Royal Troon Golf Club. Entering the tournament’s 72nd hole, Hamilton held a one-shot lead over Els, but Hamilton bogeyed the 18th hole, leaving Els with a 12-foot birdie putt for the win, which he missed.

Els and Hamilton headed for the four-hole aggregate playoff, in which Hamilton carded four pars while Els managed three pars and a bogey, making Hamilton one of the most improbable major winners in history.

Prior to his win at Royal Troon, Hamilton had one win, the 2004 Honda Classic, and hasn’t won since. Hamilton lost his tour card in 2010 and attempted to requalify through the Web.com Tour in 2014 and 2015. Hamilton, now 50, is finding some success on the Champions Tour.