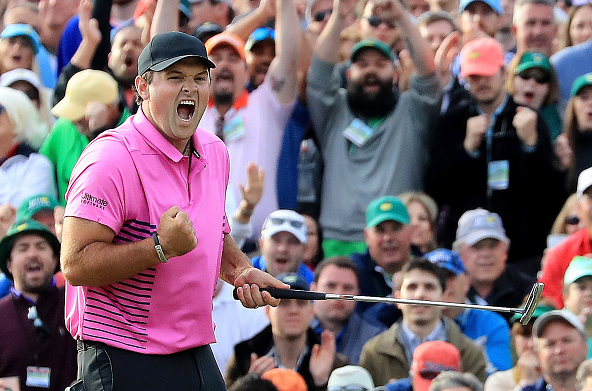 Patrick Reed was ripped mercilessly by fans and media for referring to himself as a top-5 player in the world several years ago.

Now, the famously-cocky 27-year-old has some hardware to give exceptional credence to his argument: a green jacket.

Starting the day at 14-under-par with a three-stroke advantage, Reed was not quite as brilliant as he had been in the opening three rounds, but he was good enough.

Despite the newness of owning the pole position at a major, Reed held the lead like a veteran, holding off an early charge from four-time major champion Rory McIlroy, and furious late charges from Augusta savant Jordan Spieth and major-desperate Rickie Fowler, to shoot a 1-under 71 and become the fourth straight player to make The Masters their first career major.

A collegiate star at nearby Augusta University (known as Augusta State at the time) where he won two NCAA national championships, this was an appropriate first major victory venue for Reed, who had mostly been known for his inspired Ryder Cup performances.

Scoring was shockingly low for a Sunday at the Masters, and while Reed was not one of those going deep in the red, he made the shots he needed to, and never looked panicked, even when former Masters Champion Spieth managed to tie him late.

A sizzling 69-66-67 start gave Reed a three-stroke lead heading into Sunday, but with it being his first time holding a a 54-hole lead in a major, that advantage was not safe, regardless of how few players were perceived as truly still being in the mix.

A wayward tee shot on No. 1 led to a quick bogey, and after a par on the par-5 second hole, coupled with a birdie by Rory McIlroy, Reed’s three-stroke lead had been cut to one.

But Reed was able to bounce back after each blemish as bogeys on Nos. 1, 6 were offset by birdies on 3, 7, allowing him to turn at even par 36.

As Reed was gutting out each hole, some of his competition exploded into the picture – most notably, Jordan Spieth.

Nine strokes back to begin the final round, Spieth grabbed a share of the lead at 14 under after making birdies on 12, 13, 15, and 16. A clutch birdie by Reed on No. 14 moved him into the red for the first time all day, and back into the lead.

Spieth’s rally came up short when he bogeyed 18, but some late stellar play from Fowler kept the pressure on Reed. With Fowler in the clubhouse at 14 under, Reed needed a par on the final hole to win the Green Jacket.

A clutch drive and solid approach later, Reed had two putts for par from 20 feet to avoid a playoff. His second rattled in for par, and Reed was crowned the newest Master Champion.

Over the first three rounds, Reed was a special kind of amazing on the par-5s, somehow averaging fewer than four strokes per par-5 hole, and playing them in 13-under par (9 birdies, 2 eagles, and a par).

Strangely, those same holes got the better of him on Sunday, with Reed shooting par on all four, but he played well enough on the other holes to put together his fourth straight under-par round.

WHAT IT MEANS FOR REED

Reed is now exempt for the Masters for life. It seemed unlikely that he would not have qualified for Augusta each year of the near future, but with surprises like Brandt Snedeker and Lee Westwood failing to make the field this year despite tremendous Masters records, it is nice for Reed to have that security.

Having last won in 2016 (The Barclays), this triumph puts an end to the longest winless drought of Reed’s professional career.

This is also enormous for his profile and perception, as he is no longer seen as just the “Ryder Cup Guy.” His competitors know that he can win anywhere.

Scoring was phenomenal on Sunday, almost un-Masterslike, but the great conditions brought out a plethora of red numbers.

Coming into the week, the largest 54-hole comeback at The Masters was 8 strokes, accomplished by Jackie Burke Jr in 1956, and Jordan Spieth very nearly out-did Burke on Sunday.

Starting the day nine-strokes back, and playing with close friend Justin Thomas, Spieth brought his A game, making the turn at 5-under, and with four birdies in a five-hole span on the back nine, he even tied for the lead briefly.

One of those birdies even came on the 12th hole, which had obliterated his tournament chances two years in a row. His chance to get into the clubhouse at 14-under or better and put extra pressure on Reed ended with a final-hole bogey, his only bogey of the day, but his 8-under 64 was just one off the tournament record.

Spieth finished in solo-third, his fourth finish inside the top three in just five Masters appearances.

Tournament record watch was on when Paul Casey decimated Amen Corner and reached 8-under par through 14 holes.

After a birdie on 15, Casey needed to play the final three holes even-par for the record, but finished par-bogey-bogey for a 7-under 65. Casey’s 15-spot rise into a tie for 15th was the third-largest rise of the day, trailing only Webb Simpson and Branden Grace, who propelled 16 shots up the leaderboard with great Sunday rounds.

Tony Finau was the early talk of the tournament after he dislocated his ankle in the par-3 contest, but still somehow shot a 4-under 68 in round one.

The Masters rookie did not fare as well on Friday and Saturday, but got a special kind of hot down the stretch on Sunday, carding birdies on six consecutive back nine holes, one short of The Masters record held by Steve Pate and Tiger Woods. Finau finished with a 6-under 66, and at T10, he was high finisher among first-timers at Augusta.

Fowler’s final round 5-under 67 was his first sub-70 Sunday round in eight 2018 starts, and he put considerable pressure on Reed with four birdies over his last seven holes. Fowler is still looking for major No.1, but he now has eight top-5 finishes in majors, including three runner-ups.

LIMPING TO THE FINISH LINE

It was a very difficult and disappointing day for Rory McIlroy, who got to play in the final Sunday pairing, and would have become the sixth golfer in history to complete the Career Grand Slam with a victory.

He looked good early, salvaging an unbelievable par after a ghastly drive on No. 1. But after a ridiculous approach shot on the par-5 second gave him a short putt for eagle, Rory missed the short eagle putt, and after another short missed-putt, Rory lost all momentum and struggled to get anything going.

His 2-over 74 was tied for the worst Sunday round among the top 35 players on the final leaderboard.

That man he was tied with was Tommy Fleetwood, who went on a late Saturday birdie binge to reach 6-under after 54 holes, but it was a completely different story for the reigning European Tour’s Race to Dubai Champion.

Four bogeys, including two on par-5s, was offset by just two bogeys, and Fleetwood ended up tying McIlroy with a 2-over 74. He finished T17 for the week.

The most hyped pairing of the final day was the 2:00 pm start for Spieth and Justin Thomas, and while both were a long ways behind to start the day, there was hope the two close friends could play off each other and maybe make a run.

Spieth did his part, Thomas did not. Thomas, the winner of the most recent major before this week (the 2017 PGA Championship) was a respectable 3-under through 15 holes, but an abysmal finish led to a 1-over 73, which dropped him into a tie for 17th, nine strokes behind his playing partner.

Expectations for Tiger Woods coming into Masters week were very high considering he had not played in a major since 2015. His remarkable past in this event (he is a four-time Masters Champion), and some promising results in recent tournaments had many thinking green jacket No. 5 and major championship No. 15 could be this week.

It appeared that expectations should have been tempered a bit after he shot 73-75-72 in the first three rounds, but an exceptional Sunday 3-under 69, which included five birdies and an eagle is certainly something positive to build off of.

Tiger stated prior to the round that his Sunday goal was to reach even-par for the tournament, and he just barely missed doing that after a bogey on 18. A 1-over finish meant a T32, his second-worst Masters result in 20 starts as a professional.

After the round, Tiger was optimistic about his performance off the tees, which he had been struggling with since his recent comeback from back surgeries, and he imputed his pedestrian week to poor iron play which he felt gave him too few birdie chances.

“It was going to be tough. Any time you have to close off a golf tournament is really hard, but to close off your first major and to do it at a place that is so close to me, being where I went to college.

I knew the lead was going to shrink sometimes, I knew the lead could grow, it’s just the flows of golf, you have to know how to handle it, and the only way I felt I could get that done was to make sure the putter was working, and it was tough out there.

“But to be able to make that putt on 14 and then the two-putt on 17, it just gave me that momentum going into 18, which in the past has given me so many issues, to be able to have to par the last hole to win my first major, it definitely felt right.”
– Patrick Reed