Last week I posted an opinion piece on the Jon Rahm / COVID-19 debacle that took place after the third round of the Memorial.

I began the post somewhat provocatively: “The PGA Tour wants to jab healthy young men with an experimental vaccine that has resulted in about *5,000 reported deaths, and all kinds of other **side effects such as heart-related issues.”

The article was picked up by several left-wing news aggregators, resulting in a wave of negative comments that fell into a few buckets: a.) those who were respectful but honestly flabbergasted that anyone could have an opposing opinion; b.) those who posted similar-sounding screeds as if they were part of an organized army of anti-freedom goons; and c.) absolute lunatics who spewed vile hatred.

Regardless of the bucket each fell in, almost all criticized my sources as “fake” and “not credible.” Yet less than one week later, the CDC announced an emergency meeting to address the COVID-19 vaccine’s link to heart inflammation, particularly among the demographic that is the PGA Tour: young men. 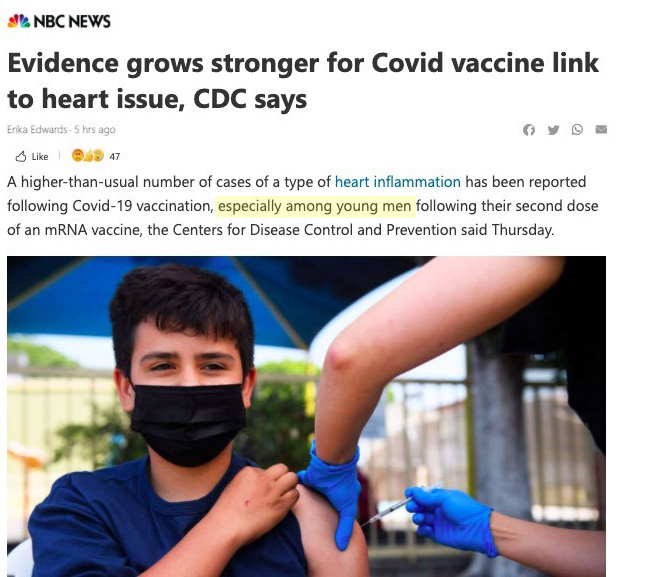 Then today, star soccer player, Christian Eriksen, had a heart attack on the field for the entire world to witness.

Early reports say he had just been vaccinated.

2/ Given the data on myocarditis and the fact @cdcgov and other health authorities are now openly worried the mRNA vaccines can cause heart problems in young men, for reporters to pretend whether vaccines aren’t part of this story is ludicrous. But I guess they’ll try.

Remember: the demographic that is the PGA Tour player (or any pro athlete for that matter) basically has a zero chance of dying from COVID. In fact, many that get infected with the man-made Chicom virus are asymptomatic like Rahm.

Others like Jordan Spieth, who recently came down with COVID and described the illness as “no big deal.”

During the entire 16 months or so of COVID, how many PGA Tour players have died? That would be zero. How many have been hospitalized? Again, zero.

How many, though, will have heart issues in the near future, or down the road? That is still to be determined.

The side effects of myocarditis are miniscule, Big Pharma/pro-vaccine activists argue. That may be. But why would you roll the dice on your young and healthy heart over a virus that has a zero-percent fatality rate among your demographic?

David Juurlink, head of the division of clinical pharmacology at the University of Toronto, believes heart inflammation cases are now almost assured to be side effects of the vaccines.

Once a proponent of the jabs, even for children, Juurlink now believes they should be avoided until more studies and data are made available.

Initially eager for his own children (ranging in age from 15 to 22) to get their first doses of the vaccine, Dr. Juurlink is now inclined to wait for more data before allowing a second dose.

“I would like to have more information about the true incidence of this complication before the second dose is given,” he was quoted in the Globe and Mail.

“And I think that their second dose should, for now, be given to people who are at higher risk of getting sick.”

As for the other nonsensical argument: ‘Do it for your loved ones so you don’t pass it on.’

Those who are in the high-risk pool SHOULD get vaccinated. It’s bet well worth taking. And those vaccinated should be protected. (At least that’s how vaccines used to work.)

We reached out to the PGA Tour but have not received a reply.