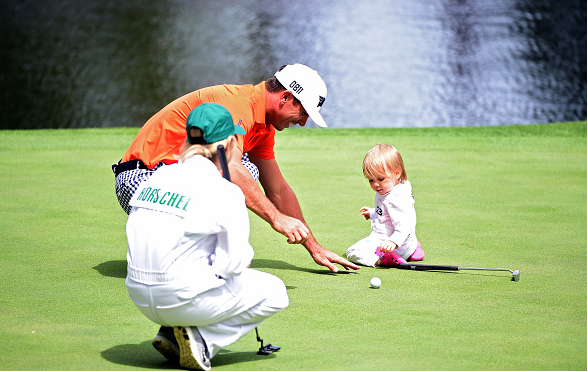 In today’s Pro Golf Weekly rundown, we have news on Billy and Brittany Horschel’s triumphs and struggles; an update on Jordan Spieth’s new equipment; the announcement that Maverick McNealy was chosen as the Ben Hogan award winner; the news that Ha Na Jang is leaving the LPGA Tour; and nuggets on Alvaro Quiros winning in Italy.

One of the top names missing from the field at The Masters early last month was 30-year-old Billy Horschel, a four-time Tour winner whose famous 2014 FedEx Cup Playoffs tear won him the FedEx Cup title that year.

Horschel might not have qualified for Augusta, but after his thrilling playoff victory at last week’s Byron Nelson classic, he will not start the season 0-2 in major starts, as he jumped high enough to qualify for next month’s U.S. Open at Erin Hills.

“There’s a couple reasons I came here. I don’t think I have to worry about now but fortunately I was outside the Top 50 so I wasn’t qualified for the U.S. or British Open. It sucked this year. It honestly sucked to miss the Masters. I hated it.”
–Billy Horschel

Horschel’s Wife Opens Up About Battle With Alcoholism

In an interview that occurred after his victory at the AT&T Byron Nelson, Horschel was extraordinarily emotional and made a nebulous reference to personal challenges.

On Monday, Billy’s wife, Brittany opened up on Twitter about her alcohol problem, which has weighed heavily on the couple.

“This weekend marked one year sober for me, but also marked a very hard-fought year for Billy. He deserves to soak in the glory of his win yesterday, throw his feet up and just let out a deep, long breath.”
–Brittany Horschel on Twitter

The most prestigious honor in college golf is the Ben Hogan Award, given annually to who is determined to be the best collegiate player.

This year’s winner is 21-year-old Maverick McNealy of Stanford University. It was his third time being a finalist for the award, and his first win.

“Thank you so much to @BenHoganAward for a very special night. It is an absolute honor to be named winner this year.”
–Maverick McNealy via Twitter

South Korea is to women’s golf what the United States is to men’s basketball: far and away the best in the world. One of their higher-profile players on the LPGA Tour is Ha Na Jang, the world’s No. 10 ranked female golfer.

The 25-year-old announced that she will rescind her LPGA membership and play full-time in Korea, a stunning development for a Tour she was playing well on.

“Now every day crying in my room, last night, last week.”
–Ha Na Jang, discussing the public backlash over her celebration after she won the HSBC Women’s Champions

It was not long ago that a long-hitting Spaniard by the name of Alvaro Quiros was considered among the best players on the international golf scene.

All that changed this past weekend, however, as Quiros emphatically ended his slump with a victory at the Rocco Forte Open, a European Tour event.

“I’m very happy. Obviously it shouldn’t be like that but at the end it’s a victory and that’s the most important thing. It’s been a little bit of a mess.The game wasn’t that bad. Just the last few holes I started to struggle with the wind left to right and he was playing nice, Pep was playing nice too.”
–Alvaro Quiros, after his Rocco Forte Open victory

As one of the PGA Tour’s premier players, Jordan Spieth is used to having his every move analyzed. That move this time, is a switch away from the long-time Scotty Cameron, which he has been using since 2009, well before his professional career began.

A dip in 2017 putting stats was the big factor in the surprising change. In his first tournament with his new putter, a Futura T5W Tour Only (a prototype), Spieth missed the cut at the AT&T Byron Nelson.

“I haven’t been comfortable standing over it for a little while, and so I just wanted something that’s a new look, and the bigger a deal that’s made out of it the more bothersome that is for me. It’s not really that big of a deal, and every guy switches putters every single week. It’s nothing new. Just a new look for me for the time being.”
–Jordan Spieth, on the putter change