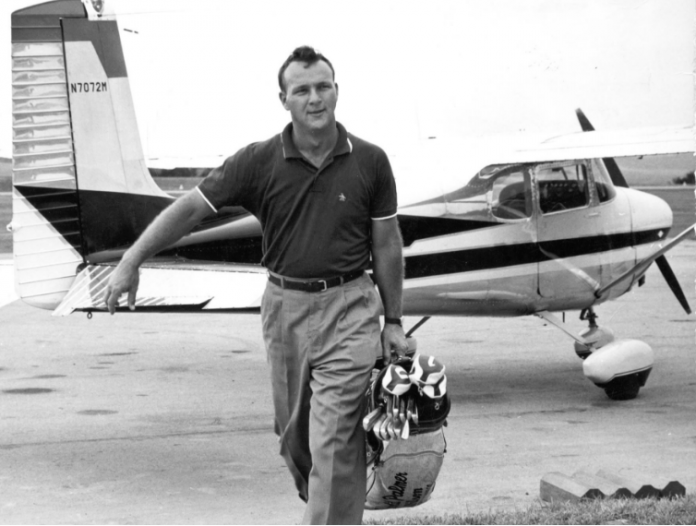 Monday means reminiscing about the weekend golf action, and this Monday comes on the heels of an unforgettable Sunday. The final round of the Tour Championship, the finale of the FedEx Cup playoffs came to a thrilling ending where Rory McIlroy held off Ryan Moore and Kevin Chappell in a playoff to take both the Tour Championship and the FedEx Cup (and its $10 million prize).

It was not a good day for presumptive Player of the Year Dustin Johnson, who was a co-leader going into round 4, but had the worst round in the field, and did not get the help he needed from others to hold onto the #1 spot in the FedEx Cup Standings. While Ryan Moore didn’t win, something great came out of the Tour Championship for him: Davis Love III chose him with his final Ryder Cup Captain’s pick.

The other reason yesterday was unforgettable a sad one: PGA Tour legend Arnold Palmer passed away. A universally loved figure in golf, there has been a lot of emotion expressed in the aftermath of his passing. Today, the golf world remembers and celebrates Arnie.

As exciting as yesterday’s FedEx Cup finale was, the story ended up taking a back seat to the awful news that legendary golfer Arnold Palmer passed away at the age of 87.

The reactions and tributes from Palmer’s contemporaries have been especially tear-inducing.

This one is from Gary Player, who dueled with Palmer many times on the course.

The Champions Tour put out an amazing video about Arnie’s greatness.

The world lost a legend and a great man on Sunday. Rest in peace, Mr. Palmer. https://t.co/FiivQ3sfX7

From Phil Mickelson, who is possibly the Arnie of his generation.

"I’ve respected a number of players who came before me but Arnold Palmer was my model on and off the course." – PM https://t.co/kdGVveteD3 pic.twitter.com/zIWTFehfwn

Remembering the special times I spent with Mr Palmer at Bay Hill. A true pioneer for our sport. Forever remembered. pic.twitter.com/qJQBpDWTWv

Many players, such as this one from Ben Crane, shared classic pictures of Palmer in his prime. He seems to perfectly exemplify “Old School Cool”.

Don't know if any other athlete did more for their sport than Arnold Palmer did for golf. He made it cool because he was cool. RIP #legend pic.twitter.com/hyEgLD8DBK

And this one from the PGA Tour.

Arnold Palmer playing golf while serving in the Coast Guard, circa 1952. #ArniesArmy pic.twitter.com/QcucfwmVrZ

Another (sort of) contemporary, Tom Watson.

Not only will Arnie always be remembered as the King, he's the best friend that golf has ever had. We will sorely miss his passion & charm.

Most everyone in golf sent out a tweet. Here are a few more.

The day we hoped would never come. Arnold Palmer, you will be missed. Suiting that your final "charge" was on a Sunday.

Thankful for the time my family and I got to spend with "The King". Golf and sport lost an icon today. RIP Mr. Palmer pic.twitter.com/OK7VOZ0l8n

Forever indebted to the King. I was fortunate enough to have KVenturi as my mentor and Mr Palmer as a friend. Ive been truly lucky! #RIPKING

If Mr. Palmer's life was a round of golf, he's the only guy to ever shoot 57. #TheKing

Suzann Petterson, who happened to be at Bay Hill  (considered Arnie’s course) took a picture of Arnie’s spot on the practice range.

It's with mixed emotions Iam out at Bay Hill today! A picture from Arnies spot on the range. Let's celebrate his life playing the game he loved so much. #theking #golf #arniesspot

President Barack Obama even got in on the tributes.

Here's to The King who was as extraordinary on the links as he was generous to others. Thanks for the memories, Arnold. pic.twitter.com/UlyfpIBOL2

The most touching thoughts may have come from Jack Nicklaus, Arnie’s greatest rival.

I just got the news at about 8:45 that Arnold had passed. I was shocked to hear that we lost a great friend (continued) pic.twitter.com/skehUsQgww

Ryan Moore being named to the American Ryder Cup team as Davis Love III’s last captain’s pick ended weeks of speculation. Moore, mostly due to his recent hot play, was believed to be in the mix with Bubba Watson, Justin Thomas, Jim Furyk, and maybe even Tiger Woods. The reactions to the move were overwhelmingly positive.

Honored to be selected for #teamUSA – it's a good day to be a #12thMan in multiple ways @Love3d @Seahawks @rydercupUSA ??

Bubba Watson, who likely would have been the pick had Moore not gotten hot lately, posted a classy response. There may not have been anyone who wanted to be at the Ryder Cup more than Bubba. He will be back.

Justin Thomas, another talented young player who was believed to be under consideration for that last captain’s pick, responded similarly to Bubba:

Congrats to Ryan on the last pick for @RyderCupUSA, much deserved. Hurts not being there, but pulling like crazy for team USA next week! ??

As one of the bigger personalities on Tour, Bubba Watson has a lot of fans and haters. Getting passed up for the Ryder Cup brought out a lot of trolls.

Being ranked 7th in the world and still not getting picked speaks volumes about your personality.

Bubba has taken the high road so far, but nobody would fault him if he went Robert Allenby on those trolls.

Commercial of the Day

ESPN’s Sportscenter has been a paragon of genius advertising. One of their recent commercials featured Arnold Palmer at SportsCenter headquarters in Bristol, CT. It was some of their finest work:

We'll be having an Arnold Palmer for The King tonight. pic.twitter.com/1VhpxS3PA3

In the eight year stretch from 1957 to 1964, Arnold Palmer was had the following statistics:

Palmer was unquestionably dominant in the late 50s and early 60s, one of the most dominant stretches of golf the game has ever seen. He finished his career with 62 wins, the fifth most in PGA history.

Rory McIlroy is Europe’s highest ranked player, and is likely their biggest asset in their quest to retain the cup in America. The European Ryder Cup team watched the end of the Tour Championship, where McIlroy went 5-under on the back nine to get into a playoff that he would win. His teammates appear to be happy for him:

Charity of the Day

A group of Web.com tour wives assembled a cart for the children at the Nationwide Children’s Hospital in Columbus, OH.

Last week, #WebTour Wives came together to "Fill the Cart With Fun" for @nationwidekids patients. pic.twitter.com/zHDcLcg1kY

As for the tournament itself, the final round of the third leg of the Web.com finals, American Grayson Murray shot a three-under on the back nine to defeat young Australian golf prodigy Cameron Smith. With the win, Murray secured his PGA Tour Card for next season. Joining Murray on the Tour next year will be Kevin Tway (T3), Martin Flores (T4), and Ryan Blaum (T13), who all their their cards via the top 25 on the Web.com finals money list.

The last tournament of the Web.com finals will be the Web.com Tour Championship in two weeks in Atlantic Beach, FL.