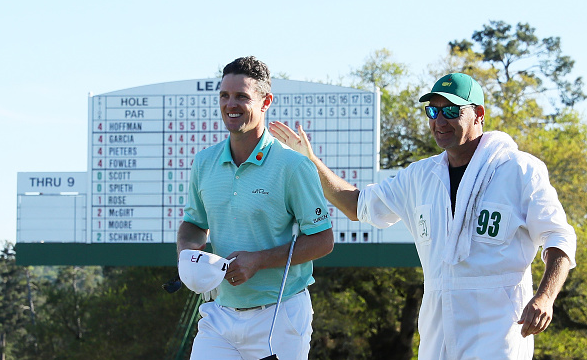 After 54 holes at the Masters, the leaderboard is top-heavy with superstars and just as many fantastic storylines. Sunday’s final round is setting up to be an historic 18 holes at Augusta National Golf Club.

World-class European players, Justin Rose and Sergio Garcia, are tied for the lead at 6-under par. Rose, the reigning Olympic Gold Medalist, closed with five birdies over his final seven holes on Saturday to post the best round of the day: 5-under 67.

Garcia, who historically struggles at Augusta on day three, posted a neat 2-under-par, aided by birdies on the final two par 5s (13 and 15).

Rose and Garcia will play together in Sunday’s final pairing.

Rickie Fowler, the 36-hole co-leader, is only one shot back of Rose and Garcia, at 5-under-par. The 28-year-old Fowler was up and down through the first 10 holes (3 bogeys, 2 birdies), but was clean over his final eight, while dropping two birdies on 13 and 15 to get in the red for the day (-1).

Fowler is all alone in 3rd place, and will be paired with good friend, and 2015 Masters champion, Jordan Spieth in the second-to-last pairing on Sunday.

Spieth shot a 68 on Sunday, which included five birdies and just one bogey (his first blemish since his quadruple bogey in round one). The terrific play moved Spieth into a tie for fourth place, along with Ryan Moore and Charley Hofffman at 4-under-par.

It’s been an incredible comeback of sorts for the 23-year-old Spieth.

After an opening-round 3-over 75, which included quadruple bogey-9, Spieth found himself 10 shots back of first round leader Hoffman (-7). Then following a second-round 3-under 69, Spieth moved to even-par for the tournament, and just four shots off the lead. And now the two-time major winner is just two shots back with 18 holes to play.