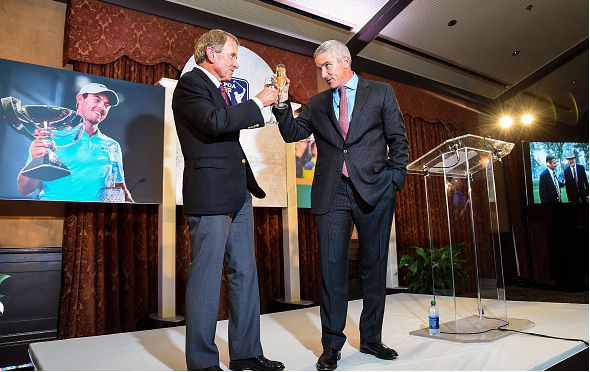 According to a press release by the PGA TOUR Policy Board, Tim Finchem has announced his retirement, effective at year’s end, and that Jay Monahan will be his replacement.

If you’re a follower of the Tour like we are here at this space, the news comes as little surprise. Monahan has been groomed to succeed Finchem since about 2014 when he assumed the title of Deputy Commissioner, and COO. Recently, Monahan has taken on the role as the defacto commish relative to ceremonial duties.

For those unfamiliar with Monahan, here are 10 things to know about the new Tour Commissioner.

The new Tour commissioner is a product of Boston, who made his early mark on the PGA Tour as the director of the Deutsche Bank Championship.

Monahan played hockey and golf at Belmont High School, graduating in 1989. He holds an undergraduate degree from Trinity College (’93), where he was a four-year member of the golf team and a Division II Academic All-American his senior year. He earned a masters degree in sport management from the University of Massachusetts at Amherst in 1995.

Monahan spent three years as executive director at IMG Worldwide, where he played an integral role in the development of what is now the Dell Technologies Championship (Deutsche Bank Championship) at TPC Boston in Norton, MA, and served as the tournament’s first director (2003-06).

In 2003, Monahan and good friend Brian Oates attended the funeral of a friend and colleague, Rob Stevens, who died too young of cancer. Rob left behind his wife Lissa and three young children – Alana, Adam, and Robbie. Jay and Brian left the funeral that day and made a commitment to run the Boston Marathon to raise funds to help Rob’s family. The next year, they officially launched Golf Fights Cancer as a 501(c)3 non-profit organization.

After his stint as the director of Boston’s Deutsche event, Monahan was hired as the Executive VP for Fenway Sports Group – where he led the sales and business development efforts. Additionally, he directed FSG’s sponsorship sales operations for the Boston Red Sox, Major League Baseball Advanced Media, NASCAR’s Roush Fenway Racing and Boston College Athletics.

In 2008, Monahan moved from Boston to Ponte Vedra Beach to take on the role of Executive Director of THE PLAYERS Championship. Monahan told Golfweek’s Jim McCabe, a Boston friend, that “there’s only one thing I could leave the Red Sox for, and that’s golf.”

Monahan was a varsity golfer at Trinity College, a D2 program, where he was an Academic All-American. He reportedly plays to about a 3 handicap and was a member at Winchester CC – an exclusive club just north of Boston.

Monahan is married to Susan, and they have two daughters, Sophie and Phoebe.

Will Zalatoris Wins PGA Tour Rookie of the Year Award