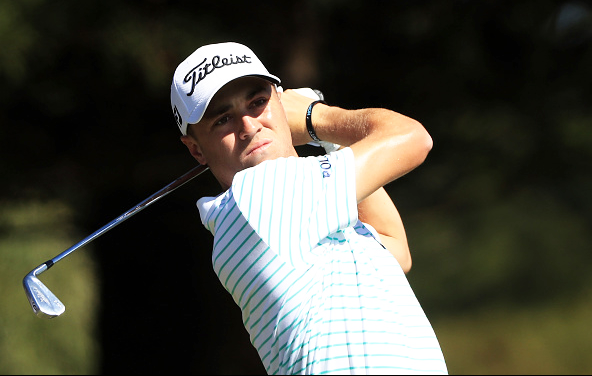 On a nice day in Maui (when is it ever not?), scoring conditions were near optimal, and an elite field composed entirely of 2016 PGA Tour event winners carved up the Plantation Course at Kapalua for a second consecutive round.

After two rounds of the SBS Tournament of Champions, the first PGA Tour event of 2017, two recent winners, Justin Thomas and Ryan Moore share the lead.

The duo shot matching 6-under 67s for the second consecutive day, putting them one stroke ahead of American Ryder Cup star Patrick Reed and PGA Championship victor (and 18 hole leader) Jimmy Walker.

Justin Thomas made the SBS field off his successful title defense at the CIMB Classic in Kuala Lumpur, Malaysia. Thomas got off to an excellent start in his second round, posting birdies on 3, 4, and 5 and then adding two more on 17 and 18 to score what was a tie for the second best round of the day.

The former Alabama golf star hit all 18 greens in regulation and has just one bogey in two rounds.

Like Thomas, Ryan Moore also had just one bogey in the second round, but he got his out of the way early – on the second hole.

Moore finished hot, with birdies on five of his last seven. The man who has been on fire since his win at the John Deere in August, was a surgeon off the tees, missing only one fairway all day.

One of the biggest stories at Kapalua has been the recent absurdly good play from Japan’s Hideki Matsuyama, who has won four of the last five tournaments he has entered.

Matsuyama was at or near the top of the leaderboard all day, until an untimely double-bogey on 17 pushed him down to the sixth. However, he still finished the round with a five-under 68, and is only three strokes out of the lead going into the weekend. He is still one of, if not the, man to watch.

Trending Up in Round 2

Defending champion Jordan Spieth who blitzed the 2016 field by eight strokes, had a somewhat disappointing round one, shooting a one-under 72.

Spieth seems to have his tournament back on track, using a four-under 69 to get back within reasonable range of the lead. The defending champ played the 8th and 17th holes to a combined 5-over, but used nine birdies on the day to still post a good solid round.

Brendan Steele eagled the par-5 15th on his way to a 6-under 67. And despite a mediocre opening round 72, the recent winner of the Safeway Open is on the periphery of the top-10.

The round of the day went to Barclay’s Champion Patrick Reed, who shot a bogey-free 8-under 65. Reed birdied four of his last five holes, and is now just one stroke behind leaders Thomas and Moore.

Not Their Best in Round 2

Only two players in the field shot over-par on the day. One was South African Branden Grace, who was unable to birdie a single hole on the back nine on his way to a 1-over 74.

The other was Colombian Jhonattan Vegas, who struggled for a second straight day. A bogey, double-bogey finish on the front-nine was too much for the reigning Canadian Open champ, who finished his round at 3-over par, and currently holds the 32nd position in the 32-man field.

“I just made putts, I had a couple nice wedges which were taps ins, which was nice. I got the putter rolling on the back side. I burned a lot of edges yesterday and the early part of my round today, so it’s nice to see them start going in.”
–Ryan Moore, round 2 co-leader