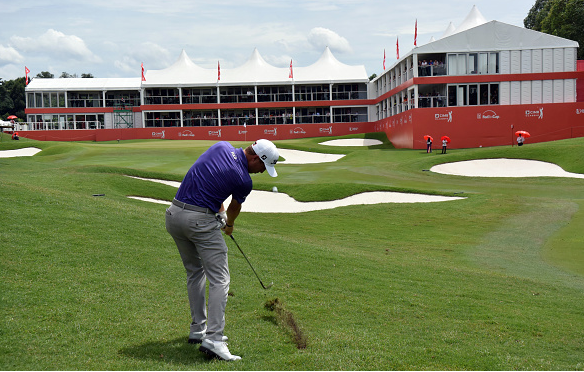 The CIMB Classic wrapped up its first round overnight and defending champion Justin Thomas finds himself atop the leaderboard in a three way tie with Keegan Brady and Derek Fathauer at 8-under par.

Aside from the leaderboard, the main storyline at the CIMB seemed to be the oppressive humidity in Malaysia. The temperature will be in the low to mid 90s for the four rounds, but the humidity is where it gets uncomfortable over in Southeast Asia, reaching anywhere from 75-80%.

Here’s a roundup of quotes from some of the top players in the field at TPC Kuala Lumpur, commenting on the weather.

“It’s just different, man. It’s very similar to Florida heat. It gets really hot in Louisville where I’m from, too, in the summers. But I feel like once it gets to about that 95, 100 heat index, it’s all the same. We’re wearing pants, we’re sweating a lot and it’s really just trying to maintain energy. I felt really weird to start the day. I told Jimmy I felt kind of like Jello and I just felt weak, but I just tried to drink as many waters as possible.”

“Not (used to it) this hot, but I live in Florida in the States and it gets hot. But this is extreme. This is really hot right now, yeah. (As the day went on) it got hotter but conditions were really good for scoring. Not a lot of wind and greens were soft.”

Sergio Garcia Felt Like He Was “Going To Explode”

“It’s tough. I don’t think there’s a formula obviously. You have to drink a lot, which I do, but just there’s so much heat just kind of condensed in your whole body throughout the day that sometimes it feels like you’re going to explode. You know, it was a little bit of breeze which made it a little bit better, but Asian heat is always like this.”

“I’m not used to the humidity being an Arizona guy, but yeah, I cope with the heat pretty good. Having lived in the desert for 20 years, I know how to hydrate; I know how to eat. The aches and pains are not quite as painful when it’s hot, as well. The arthritis and things like that are, you know, yeah, easy to warm up. You go out there for five minutes and you’re ready to go, so I kind of like it.”

“I just need to drink and stay hydrated. I wasn’t feeling too good towards the end of the round. It’s getting hot out there. I don’t think I drank enough water… I’m from South Florida, so it’s about as hot there. I do need to drink some more water. I probably only had two or three waters all day, so I’m going to go chug a few more.”