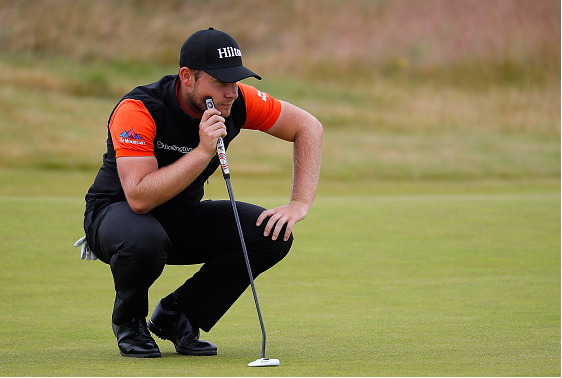 American golf fans may have noticed an unfamiliar name on the periphery of the leaderboard’s first page at the last two majors.

It is an English golfer, whose recent precipitous rise to the upper echelon of the golf world has been overshadowed by Beef-mania.

The 24-year-old from Buckinghamshire will be teeing it up on American soil for the first time at a non-major this week at the Travelers Championship in Cromwell, Connecticut. His name is likely to become ubiquitous on leaderboards and in Ryder Cup tales for a long time. Here is what you should know about him:

1. He is in the midst of a breakthrough season

Hatton, a European Tour regular, is the world’s 52nd ranked golfer, and currently holds the 8th spot on the Race to Dubai standings, ahead of accomplished golfers such as Martin Kaymer, Lee Westwood, Sergio Garcia, and Shane Lowry.

He also ranks high in a number of European Tour statistics:

Hatton has tallied six top 10-finishes in just 16 events, with a high finish of solo second at the Scottish Open. His recent form has been especially blistering with six finishes of 20th or better in his last eight tournaments.

2. He comes up big in big events

3. He makes fitness a priority

Good final gym session of the week with @jake_bailey_golf_fitness 200kg leg press… My legs might regret that in the morning ?? #gym #golffitness #training #nike #underarmour

He does not just go to the gym; he lifts with purpose, and has a fitness regimen and strategy. He hired a certified “golf fitness expert”, who works with him on strength and conditioning related to the game.

This is a video of his trainer, Jake Bailey, working with him on rotary core strength.

Working on rotary core strength with @thatton91 as he prepares for the KLM open. #SMARTtips #golffit #persueperformance #golffitness #golf #JBP

Hatton might have the advantage of being young and able to recover quickly, but he has still been durable, and his fitness likely plays a large role in that.

4. You wouldn’t want to play him in bumper pool

Potential new putter working well in practice today, see how I get on with it in the pro am tomorrow before making the decision to put it in play on Thursday! #odyssey #versa #volvochinaopen #practice #golf #europeantour

That is some impressive precision. And speaking of being precise, he also nailed the flagstick on a nearest to the pin competition at The Travelers.

Nearest the pin for charity @travelerschamp … Might have had a chance had the pin not got in the way ?? #pgatour #golf

Pretty accurate on this one too:

Tyrell Hatton knows how to channel his frustrations about a missed putt. (h/t @Adam_Sarson) pic.twitter.com/516K8ofZoh

These are his clubs from when he was three:

Just found these….my first ever golf clubs! Used these when I was 3 ??? #myfirst #golf

He even owns a mini green jacket, awarded to him at a youth competition. His father, who doubles as his coach, got him involved in golf very early. With 21 years of repetition of good habits, he plays older (in the sense of being wise) than he is.

6. He stars in a number of instructional videos for Hilton

Hilton is one of his biggest sponsors, but he is also an official charity sponsor for Sue Ryder, which specializes in hospice care.

7. His favorite color seems to be purple

Hatton incorporates purple into many of the things he enjoys, and often stands out on the course by wearing it.

Hatton is more knowledgeable of fashion than the average golfer. He is a spokesperson for J. Lindeburg golf apparel, and his girlfriend has a fashion degree.

He also owns at least one purple Xbox controller:

Out of the 7 controllers I've owned this is definitely my favourite ?? #xbox #purplechrome

He even held a contest at the beginning of the season, giving a prize to whichever of his fans designed him the best ball marker.

Competition: My season starts tomorrow, I need a new ball marking (has to be purple)
Send me your designs, winner gets a prize@EuropeanTour

As a European Tour member, Hatton travels extensively, and frequently shares the views and backdrops on instagram. He appears to have a good sense of humor, and genuinely tries to bring his fans into his experiences.

Practice and pro am done, looking forward to playing my 3rd @OmegaDDC @JLindeberg_Golf
Course is in great condition! pic.twitter.com/e1pynrdV1m