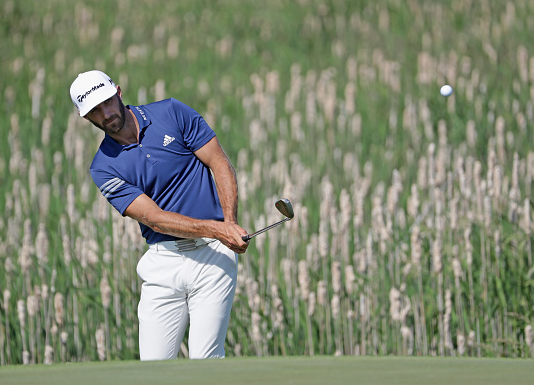 Fescue. If you aren’t acquainted with the primary feature at Erin Hills by the time the U.S. Open tees off, it’s only a matter of time. It grows green and thick out there on the Kettle Moraine, and it’s hijacked the pre-tournament chatter to a certain extent.

So we’ll leave all the fescue talk to others. Unless, of course, that really *was* Jimmy Hoffa’s remains discovered out there by Pat Perez.

As the clock ticks down to the first tee shots at the 117th U.S. Open, here are 10 other storylines to keep in mind as players trek in and out of the fescue.

Why the difference? Continued USGA tweaking.

Nearly every hole has multiple tee boxes these days, which can vary some holes by nearly 100 yards. Among four new options added in the past month is one at No.1 that can stretch the hole to 630 yards.

In calculating scorecard yardage, the USGA went from using the shorter of two options at No.1 (560 yards) to the middle measurement among three (608). Hello, Open yardage record.

For what it’s worth, Erin Hills would measure 8,026 yards if every back tee was used in the same round. That won’t happen as Mike Davis and crew take each day’s conditions into account, but it’s fun to daydream.

2. THE LONG (AND DRAMATIC) FINISH

Maxing out at about 675 yards, Erin Hills’ 18th won’t go into the books as the longest in Open history. But it easily will be the longest closing hole in Open annals and, if recent par-5 finishers are any indication, a prime opportunity for closing drama.

Recall that two years ago, Dustin Johnson had an eagle chance to beat Jordan Spieth at Chambers Bay’s 18th. That didn’t happen – nor did the birdie chance that would have forced a Monday playoff.

In 2008, Tiger Woods birdied the par-5 18th at Torrey Pines to force a Monday playoff with Rocco Mediate. Then Woods birdied it again in the playoff to force sudden death. And again a few minutes later to score his final – and perhaps most riveting – major title.

No fewer than 25 bunkers dot No.18 at Erin Hills, and collection areas surround the turtleback green. Just the recipe for a nail-biting finish.

With five more wins that followed his triumph at Oakmont, it’s no surprise that Dustin Johnson is the favorite. But history is stacked against DJ, and circumstances might be as well.

Just two men since World War II have won back-to-back Opens – Ben Hogan in 1950-51 and Curtis Strange in 1988-89. Not only that, but just one man since Strange has recorded a top-10 finish in his title defense – a tie for sixth by Tiger Woods in 2009 at Bethpage.

Johnson arrives at Erin Hills off a missed cut at the Memorial Tournament – the first time since January he had anything less than a top-15. And he arrives somewhat late, flying in Tuesday after welcoming his second child into the world with fiancée Paulina Gretzky.

His name is Roberto Diaz. And in a typical year, his role as first alternate would be one of anticipatory frustration – hoping against hope that someone would give up his coveted Open spot at the last minute. It usually ends empty-handed.

But this isn’t a typical year. Phil Mickelson is home in California, awaiting daughter Amanda’s Thursday graduation and recognition as valedictorian. The only way he gets to Wisconsin on time is if storms delay play by at least four hours.

“It’s a feeling that I’m sure nobody wants to have,” Diaz told reporters after his Monday practice round. “But it’s also a good feeling because I have a lot of percentages going my way.”

Diaz, a Web.com Tour pro, lost a playoff at sectionals in Summit, N.J., to fall to alternate status. Next on the list is T.J. Howe, first alternate from qualifying in Rockville, Md.

After rules imbroglios overshadowed both the U.S. Open and U.S. Women’s Open last year – not to mention the flak over Lexi Thompson’s penalty at the ANA Inspiration – the sport could use a stretch where armchair officials didn’t influence play.

Though new rules tempering TV review have been in play for a couple of months, Erin Hills is the biggest stage they’ll encounter yet.

The first eliminates rules violations that cannot be seen with the naked eye, such as the few grains of sand Anna Nordqvist brushed in her U.S. Women’s Open playoff last year. If you need a zoom lens or super slo-mo to see it, it isn’t a violation.

The other exonerates players who use “reasonable judgment” in application but later shown to be not as precise as they imagined. It might be determining where an errant shot crossed the line of a hazard, or replacing a ball on the green after marking it with a coin.

The USGA also announced it will assign rules officials to each hole at Erin Hills, rather than use walking officials with each group, in hopes of speeding up decisions.

This marks the 25th U.S. Open for Ernie Els, dating back to a top-10 finish at Baltusrol in 1993. It’s also the 20th anniversary of his second Open triumph, when he pipped Colin Montgomerie by a shot at Congressional in 1997.

Whether the Hall of Famer will get to tee it up in any more, though, will be a question going forward.

Erin Hills is the final use of his five-year exemption for his 2012 Open Championship triumph. Starting next year, Els will have to either rise back into the top 60 of the world rankings – he’s No.401 now and hasn’t seen the top 60 since late 2014 – or go through the qualifying process.

Or win another major, of course.

It was two months ago that Els, 47, had to make peace with the idea that he was possibly playing his last Masters. It may not be much different at Erin Hills.

It’s not as though PGA Championship titleholder Jimmy Walker has disappeared from the scene, but he’s had to pick his spots in recent months as he recovers from Lyme disease.

The U.S. Open, obviously, is one of those spots. Even with Erin Hills’ record length and the likelihood that rounds will drag well into the five-hour range, Walker has no intention of sitting out.

“I still every now and then have a little bit of the feeling, kind of the Lyme feeling,” he told Global Golf Post. “So we’ll just keep going and see how I do.”

Walker learned of the diagnosis on Wednesday of Masters week, explaining the fatigue he’d felt since last November. He’s played just twice since then, and not at all since The Players Championship five weeks ago.

Davis Love IV – who answers to Dru – is the latest in the lineage that began with Davis Love Jr., a seven-time Open participant with a best finish of 14th in 1963. Davis Love III has played 23 Opens, including a tie for second at Oakland Hills in 1996.

DL3 tried to qualify for this one, too, but fell short at sectionals in Columbus. He’ll caddie for Dru instead.

Tyson Alexander, meantime, is son of former U.S. Amateur champion Buddy Alexander, who played two U.S. Opens and went on to a 27-year career as University of Florida coach. Tyson was a four-year standout for the Gators.

Tyson’s grandfather, Skip, teed it up in six Opens, topped by an 11th-place finish in 1948.

Though it’s been a dozen years since any amateur has recorded a top-15 finish, keep the name Joaquin Niemann in mind. The 18-year-old Chilean talent already is No.1 in the world rankings, and won’t leave the junior ranks for two more months until he enrolls at South Florida.

Niemann barely missed a Masters berth when he lost a playoff at the Latin American Amateur, owns two wins in professional events in his home country and has won each of his past five events by at least four shots.

At the other end of the spectrum is 26-year-old Stewart Hagestad, who won last year’s U.S. Mid-Amateur crown and deferred plans to attend business school for a year. The USC grad was low amateur at the Masters and qualified at sectionals in Newport Beach, Calif.

After the summer, Hagestad said, business school comes back into focus.

Granted, this actually isn’t something to watch for at Erin Hills, but as stories swirl about where the Big Cat might actually be watching the U.S. Open this week (if at all), it’s worth noting that his 10-year exemption for winning the 2008 Open expires after next year.

On one hand, that epic Monday playoff at Torrey Pines just doesn’t seem that long ago. Then again, maybe it does.