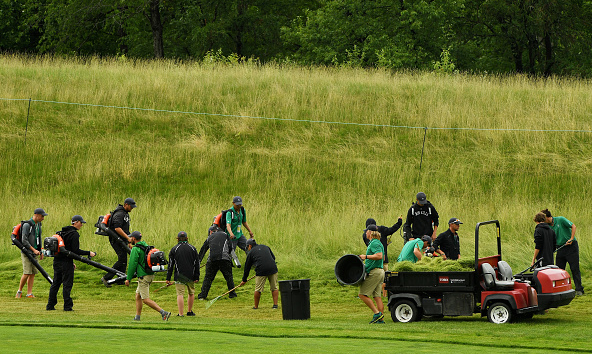 Going into this week’s U.S. Open, there has been a lot of talk about the difficultly of the fescue – the thick, uncompromising grass that outline the holes at Erin Hills.

The USGA, which takes prides in constructing the harshest conditions at any event in golf, surprised everyone on Tuesday when they trimmed the fescue on four holes.

Many are applauding the condition, while others, most notably Rory McIlroy and Jordan Spieth, thought it was unnecessary.

Darin Bevard, Director of Agronomy, explains the reason for cutting the fescue.

“We have 60 yards from rough line to rough line. You’ve got 156 of the best players in the world here. If we can’t hit it within that avenue, you might as well pack your bags and go home. These are the widest fairways we’ve ever played in a U.S. Open. Even the first and second cut is another 10 yards on top of that. So if you’ve got 50 or 60 yards to hit into and you’re complaining about the fescue that’s wider than that, I don’t think that’s an issue.”
–Rory McIlroy