Like all vaccines, we expected that the COVID-19 mRNA version would protect us from the virus. When high-profile vaccinated athletes started testing positive, the CDC came up with a term called “breakthrough.” It was always described in news reports as “rare” – as in “rare breakthrough case.”

When these “breakthrough cases” became less and less “rare,” the CDC et al once again moved the goal posts, and told us, ‘um, well, at least they’ll protect you from getting really sick and requiring hospitalization. So be sure to get the jab.’

Well, the case of Patrick Reed puts that theory to rest. The 2018 Masters Champion, as we reported, contracted the COVID-19 virus and nearly died of double-lung pneumonia. 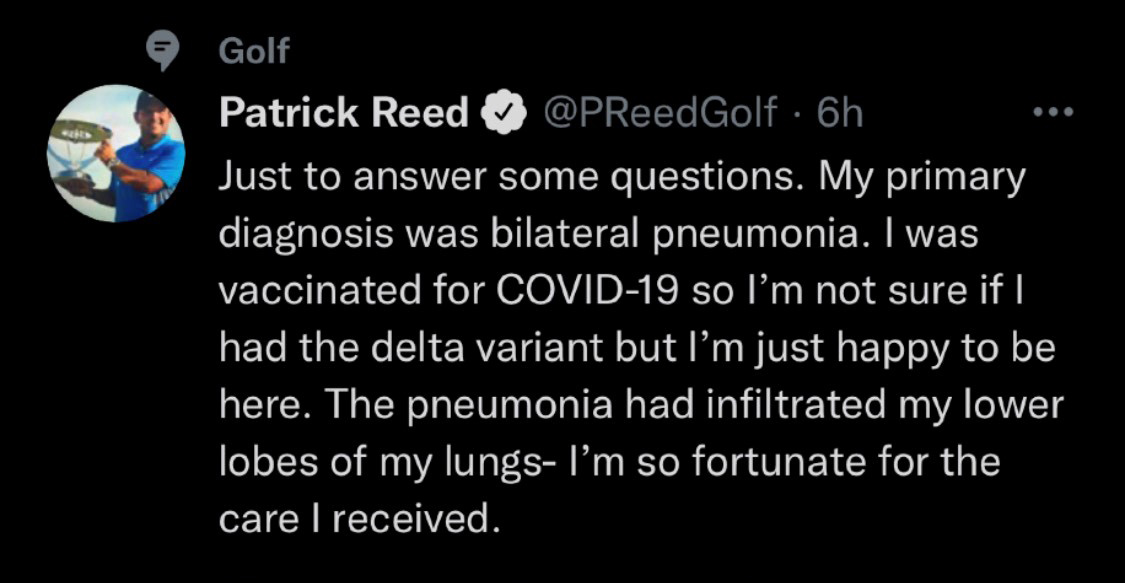 Unlike most of the media, I am not a Patrick Reed hater. In fact I’m a fan. But for him to excuse the failure of the vaccine on the “delta variant” is nonsensical. If you look at the data, the “delta variant” arrived around the same time the vaccines became fully immersed (and started to fail). Use your common sense.

As an important table-setter, remember this: for months and months, the PGA Tour, and its media allies, propagandized the benefits of the vaccine. Some players even mocked the vaccine hesitant.

Now, imagine the split screen, if you will, two weeks ago at Liberty National: on the right, you have an unvaccinated Bryson DeChambeau, who was forced to withdraw from last month’s Olympics due to a positive COVID-19 test, hitting close to 400-yard bombs in the opening leg of the PGA Tour playoffs. On the left, you have his U.S. Olympic team replacement, Patrick Reed, who was fully vaccinated, lying in a Houston hospital bed, barely able to breathe, with tubes down this throat.

With those two images seared into your memory, now think back to the media’s hot takes that aged like unrefrigerated milk. Recall how the 27-year-old DeChambeau was dragged across Twitter as some conspiracy theorist for – get this – not regretting his decision to remain unvaccinated, somehow believing he could effectively manage his own immune system, unlike tour counterparts such as Reed… or even Jon Rahm, who also got the jab and then tested positive TWICE – first losing out on a sure win (and season MVP award, and No. 1 seed in playoffs) at the Memorial, and then a chance for Olympic gold.

Yes. The COVID-19 virus is real. The more dangerous virus, though, is media propaganda.

Up next: the malfeasance of the PGA Tour and how its insistence on the vaccine resulted in a near-death experience for Patrick Reed. I have been sent the receipts. Stay tuned!