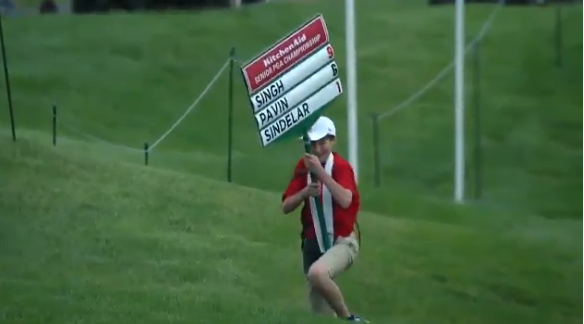 The wind coming off the Potomac River during the second round of the Senior PGA Championship was so powerful that play was actually halted for nearly an hour.

The Associated Press described it this way:

“The wind was so strong that golf balls moved on exposed greens, sand blew out of bunkers and whitecaps formed on the muddy Potomac River.”

What they could have mentioned too: It was so windy that the standard bearers (aka sign boys) could barely make their way up the fairway at Trump National.

The poor kid at one point takes a knee and seems to give up, but thanks to some strategic spin moves, he marches on.