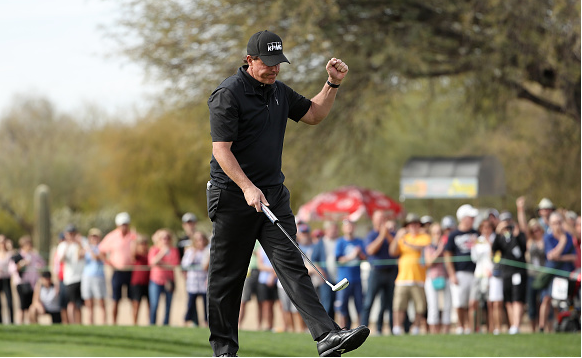 The Waste Management Phoenix Open is one of the best tournaments of the year, especially for the golf fan that likes to go out and enjoy a few beverages.

The iconic 16th hole is one of the main reasons this event draws some of the biggest crowds in golf and here are some of the best moments from the day.

This is fun. #QuickHits pic.twitter.com/J4dYRxFDq5

Get Loud For Hahn

James Hahn walked up to the tee and apparently didn’t think the crowd was loud enough. So Hahn pumped up the crowd before his tee shot, and right after he struck it.

John Rahm, winner of last week’s Farmers Insurance Open, put on an Arizona State Football jersey for his tee shot. If you remember, Rahm did the same thing last year and went on to finish T5 as an amateur!

Wearing a jersey.
Pumping up the crowd.

Golf's a little different at this hole. pic.twitter.com/0pstqdsNXn

There’s no question what the fan-favorite hole is at TPC Scottsdale, and it’s definitely not easy to get into the famous venue.

The 16th at @TPCScottsdale is busy already.

Check out the line. pic.twitter.com/1XdSvp87np

Spoiler alert: There may be a shot or two from the 16th in the top-3 shots of the day.