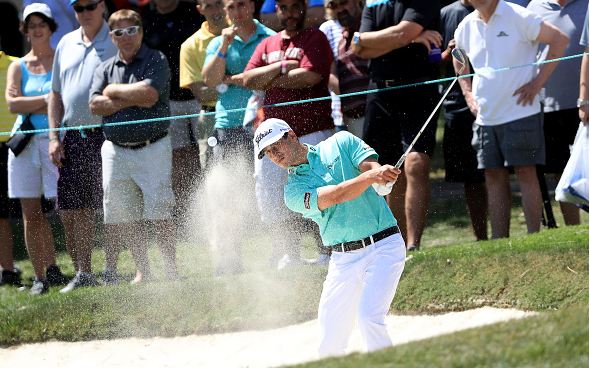 The Valspar Championship is in the books and Adam Hadwin took home the funky paint brush trophy (and lots of cash).

The 29-year-old Canadian has been impressive in the early goings of the 2016-17 PGA Tour season, with nine straight cuts-made and five top-25 finishes to go along with his victory.

Before we move on to the Arnold Palmer Invitational, let’s take a look at some of the best photos from Innisbrook – from the photographers at Getty Images.

A marshall holds a ‘Quiet Please’ sign during the final round of the Valspar Championship at Innisbrook Resort Copperhead Course.

Hadwin reacts on the 18th green after draining the winning putt.

Hadwin plays a shot out of a bunker on the 16th hole during the second round.

Hadwin holds the trophy with fiancee Jessica Dawn after winning the Valspar Championship. Their wedding his next week.

An alligator lies near the water along the third fairway during the final round as Patrick Cantlay plays a shot.

Lucas Glover plays a shot out of a bunker on the first hole during the final round.

Dominic Bozzelli hits out of a bunker on the first hole during the third round, and photographer Sam Greenwood catches it perfectly.

Ryo Ishikawa of Japan drops his club after a bad tee shot on the sixth tee during the second round.

First round leader, Jim Herman, lines up a putt on the seventh green during the opening round.

Bubba Watson plays a shot with his yellow Volvik golf ball from a bunker on the eighth during the first round.