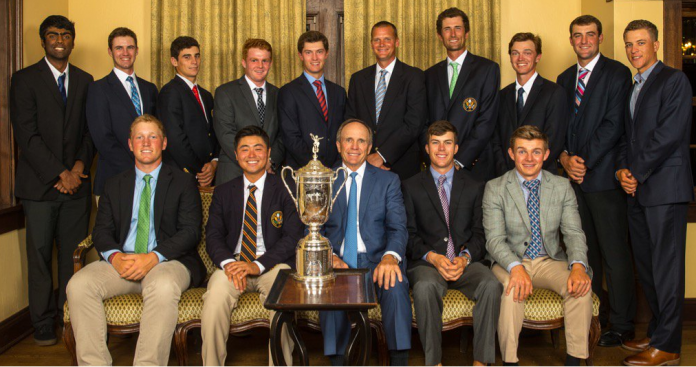 One of the most lauded aspects of the U.S. Open is its inclusiveness to amateur players. Every year brings another look at America’s golf future, and this year is no different as 14 amateurs are set to tee off at Erin Hills.

The 14 amateurs in the field competing for the #USOpen ?came together for dinner last night with Jerry Pate. ?USGA/Darren Carroll

This same group of 14 have earned a spot in the field for the U.S. Amateur to be held at The Riviera Country Club and Bel-Air Country Club, Aug. 14-20.

“It’s certainly going to be an interesting week to follow these great amateurs in the U.S. Open on FOX,” said Michael R. Yamaki, Corporate Office of The Riviera Country Club. “We are looking forward to hosting them in Southern California in August for the U.S. Amateur.”

While no amateur has actually won the U.S. Open since Johnny Goodman in 1933, there are some intriguing names in the field, and if an amateur is to break through, these three are the most likely to do it:

A 26-year-old USC product, Hagestad was the low amateur at The Masters, where he finished T36. He qualified for The Masters by winning the 2016 U.S. Mid-Amateur, and qualified for the U.S. Opening through sectional qualifying.

Hagestad does not intend to pursue a career in professional golf, instead opting for the business world, but he does tend to give it a go at Erin Hills.

A 21-year-old who played his college golf at Stanford, McNealy was the 2015 winner of the Haskin’s Award, basically college golf’s Heisman equivalent.

McNealy also won this year’s Ben Hogan Award winner, which recognizes the best player in collegiate golf, voted on by the coaches.

A native Chilean, Niemann is currently the world’s #1 ranked amateur player. Just 18-years-old, Niemann has been dominant on the international amateur circuit, and recently won the Junior Invitational at Sage Valley.

At Sage Valley, the young Chilean fired a final-round, 5-under 67 to finish at 12-under 204, a tournament record since course renovations.