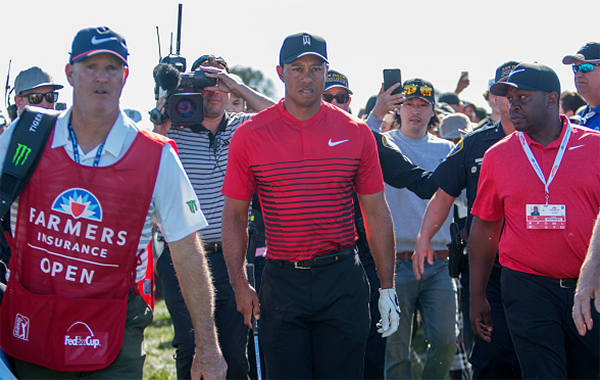 After the shocker at the Desert Classic – where unknown Adam Long took down one of the game’s biggest stars, the PGA Tour travels 150 miles southwest, from the Palm Springs desert to the San Diego coast, for this week’s Farmers Insurance Open at the venerable Torrey Pines Golf Course.

The long-running tournament, the second of the five-event “West Coast Swing,” provides yet another opportunity for the players to rack up some early-season FedExCup (and Ryder Cup) points.

The field in La Jolla, California is headlined by Tiger Woods, who will make his 2019 debut at the place of one of his most iconic moments.

The Farmers Insurance Open, originally called the San Diego Open, has been a part of the PGA Tour since 1952, with this year’s edition being the 67th all time.

Woods has won an unbelievable seven times, easily the most of anyone in tournament history, with native son Phil Mickelson next with three titles. Woods also captured his last of 14 majors at Torrey Pines, winning the 2008 U.S. Open against Rocco Mediate in a playoff.

The tournament was hosted for more than 20 years by Andy Williams, with the singer’s name appearing as part of the title from 1968-88. It is also believed to be the favorite tournament of Nelson Muntz of Simpsons fame.

Jason Day emerged from a three-man playoff, edging Alex Noren on the sixth playoff hole – the first one on Monday morning – to win the Farmers Insurance Open.

The playoff victory highlighted a remarkable comeback effort from Day, who shot an opening-round 73 and found himself ten strokes out of the lead after 18 holes. A Friday 64, the low round of the tournament, vaulted him back into contention, and going into Sunday, he was just three shots behind Noren.

By the Sunday turn, Day, Noren, Palmer, and Holmes had separated themselves from the pack, but one by one, they failed to convert their back-nine chances (Day played the back nine 2-over), and the playoff was needed to determine the winner.

In total, there are 14 players ranked inside the world top 25.

Major winners Keegan Bradley, Jimmy Walker, and Stewart Cink are some of the other familiar names.