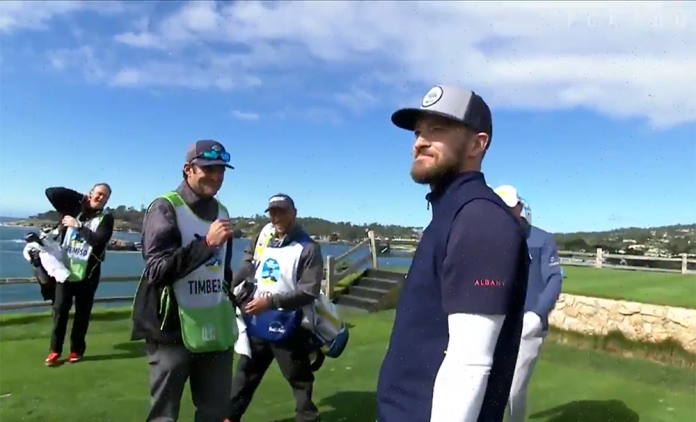 Jordan Spieth found himself back in the winners circle after recording a 4 shot victory over Kelly Kraft. Now a 9-time winner on the PGA Tour, Spieth recorded a bogey-free 70 on Sunday to finish at 19-under.

After making a strong charge, Kraft couldn’t get the help he needed from Spieth and ended up in 2nd alone at 15-under.

To recap the best moments from the AT&T Pebble Beach Pro-Am, here are the top-3 shots.

Spieth’s Birdie At The 17th

What a week it was for Spieth and he sure capped it off with a long birdie putt on the par-3 17th in the final round. Spieth, who is one of the best putters in the world from outside of 25 feet, drained this 29 footer to take a 4 shot lead into the par-5 last.

Spieth went on to par the last hole to seal his 9th PGA Tour victory.

This tournament is not only famous for the beautiful sea-side courses but also the celebrities that make the trip to Pebble Beach. Playing alongside Justin Rose in the Pro-Am tournament, Justin Timberlake came to the challenging par-3 7th in the 3rd round and nearly made an ace.

Well done JT. Might be one of the better shots we saw all week.

PGA Tour rookie Jon Rahm, has been off to quite the start. Rahm captured his first tour win at Torrey Pines after holing an incredible eagle putt from the fringe. This week, Rahm provided one of the most exciting stretch of holes by making 6 birdies in a row.

To honor Rahm’s incredible run, here is a highlight of his birdie streak.

Jon Rahm is 1 back. ? pic.twitter.com/XwV2TVknT4